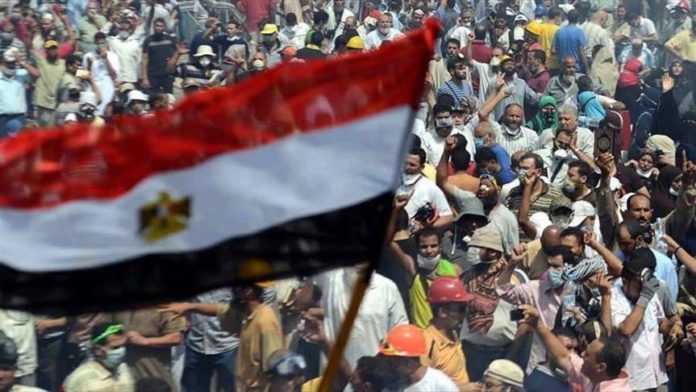 Calls to participate in an anti-regime demonstration on Friday are growing in Egypt after a youth was fatally shot by security forces in the country’s south.

An Egyptian businessman and dissident, Mohammed Ali, who lives in Spain called for the rally in all Egyptian squares, especially the Tahrir Square in Cairo which became a hub for the 2011 Arab Spring protests.

He gave it the name “Friday of Victory”.

“Protests in Tahrir Square will convey the voice of angry Egyptians to the world, unlike protests in villages and hamlets in the cities,” Ali said in a video posted on his Facebook account.

Activists took to Twitter with the #FridayofVictoryforEgyptians to raise awareness.

The Arab Foundation for Civil Society Support (AFSS) — a humanitarian organization that has been monitoring the protests — has documented 164 protests in 14 out of 27 governorates from Sept. 20-27 in which hundreds, including children, have been arrested.

The group stipulated that the reason for the string of protests is the absence of participation in decision-making.

A report published by the group further said that other reasons for public anger are continuing nationalization of parties, trade unions, and civil society, limited political freedom, the domination of state agencies over parliament, and the continued imprisonment of thousands of prisoners of conscience, and deteriorating living standards.

In September last year, Ali had called for widespread demonstrations against the regime, resulting in thousands of protesters gathering in several large cities demanding the resignation of the government.

Sisi came to power in Egypt in July 2013 after deposing the country’s first democratically elected president, Mohammad Morsi, in a military coup.