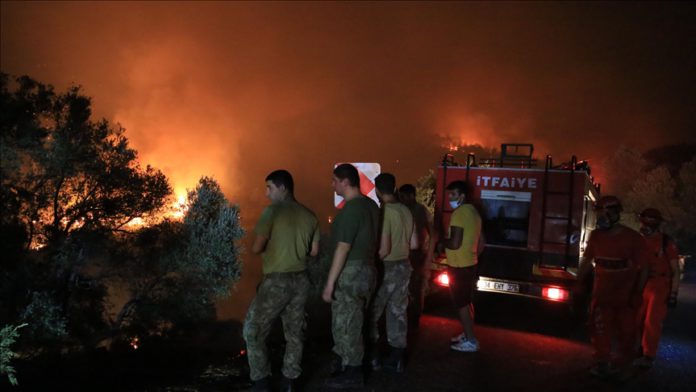 Turkey continues its efforts to extinguish forest fires in the Marmaris and Koycegiz districts of the coastal Mugla province.

The fire, which broke out in the forest area of ​​Sirinyer neighborhood, spreads with the effect of the wind. It has since reached Icmeler, Turunc, Osmaniye, Bayir, Ciftlik, Turgut, Hisaronu and Orhaniye neighborhoods.

Nine helicopters and three planes were dispatched to the region to respond to the wildfires.

Speaking in Marmaris district as part of the visits to affected areas, Turkish President Recep Tayyip Erdogan said teams from Mugla, other provinces and Azerbaijan continue their work in the region.

Erdogan said one of the fires in Marmaris was started by children, and that further investigations are underway. A suspect was detained in the Milas district, he added, and did not rule out the link between wildfires and terrorist organizations.

Since Wednesday, as many as 101 forest fires have erupted in Turkey, with most of them being in southern regions. The Turkish authorities managed to control 91 of them, and six people lost their lives.

According to the Turkish president, 50 million (Turkish) liras [$5.91million] have been released to meet urgent needs in areas that have seen environment destruction and material damage.