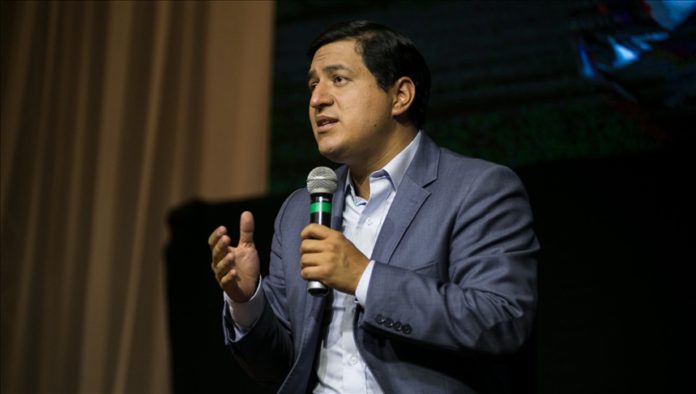 Andres Arauz has won the first round of Sunday’s presidential elections in Ecuador, with Yaku Perez expected to qualify for the second round, according to an official quick count presented by the country’s election authority.

Arauz won 31.50% of the votes against 20.04% of Perez, showed the official quick count released by the National Electoral Council a few hours after the polls closed. Guillermo Lasso came third with 19.97% of the votes.

A candidate has to receive 50% plus one vote or 40% and a 10-point lead over the rival to win the election. If candidates fail to secure it, the election goes to a run-off round.

“When we see 100% of the tally sheets, we will be in the second round,” Lasso told his followers on Sunday night.

Former President Rafael Correa’s candidate Arauz is leading the race with a 10-point difference over his rivals at a time when the country is battling resurgence in COVID-19 cases, which has claimed over 15,000 lives and infected more than 257,000 people.

Arauz ran against Perez, candidate of the left-leaning Pachakutik party; Guillermo Lasso, a former banker who has promised to crack down on corruption; and 13 other candidates, most of which were unknown to the voters.

“Resounding triumph in all regions of our beautiful country. Our victory is 2 to 1 against the banker,” he said on his Twitter account.

A relative political novice, Arauz has the backing of Correa, who stepped down at the end of his third term in office in 2017 with approval ratings over 60%. It was with Correa’s endorsement that Arauz was selected a presidential candidate.

When Correa left office, he passed the baton to his former Vice President Lenin Moreno, who distanced himself from his predecessor’s leftist economic policies, for which he has been labeled a traitor by the former president on several occasions. Correa, who is living in exile in Belgium, was convicted on corruption charges in April 2020.​​​​​​​

Arauz said that while he himself would be the president, Correa would be his “main adviser.”

The latest elections in Bolivia and Argentina have brought back the left-wing governments, which are gaining strength in the region.