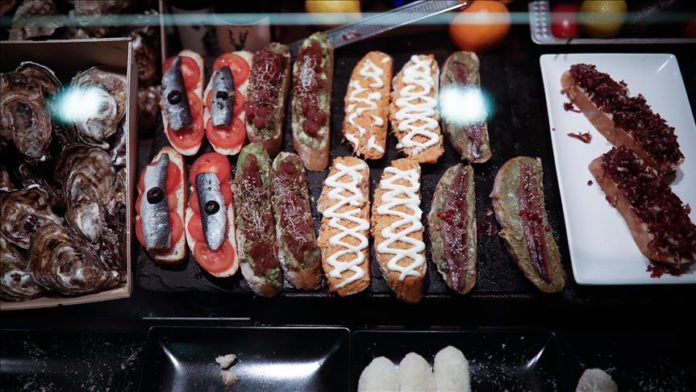 For the first time in nearly 300 years, the iconic Madrid restaurant Casa Botín has been forced to close its doors.

Spain’s strict coronavirus lockdown began in mid-March and the restaurant will not be back in business until at least late May; even then it will operate at reduced capacity and under strict hygiene rules.

“It’s like a meteor fell from the sky. We’re now completely dependent on help from the state,” Antonio Gonzalez, the restaurant’s manager, told Anadolu Agency.

Founded in 1725, Casa Botín is the world’s oldest restaurant, according to the Guinness Book of World Records.

It has survived wars, famines, and other infectious disease outbreaks, but the coronavirus pandemic poses a challenge like never before.

“My biggest fear is that there will be a second wave of the virus and when it hits, the government won’t have any resources left,” he said.

All 75 of the restaurant’s staff, including Gonzalez, are now temporarily laid off. The government is paying each of them up to 70% of their previous wage, not taking into account tips.

The servers, chefs, and managers join a total of 3.39 million other people in Spain who have been temporarily laid off, according to government figures as of April 30.

A further 3.8 million are fully unemployed.

In Spain, a country of 48 million people, only around 15 million people were actively working in April, a month that usually sees a rise in job numbers as the country gears up for the summer tourist season.

Spain’s government has promised an unprecedented €200 billion ($216 billion) bailout package, most of which comes in the form of low-interest loans to businesses.

It also includes extraordinary access to unemployment benefits and a moratorium on mortgage and utility payments, among other measures.

How the government will finance the package depends heavily on the European Union.

Casa Botín has applied for a government loan to help bear the massive losses the restaurant will incur this year, said Gonzalez.

“During the Spanish civil war, my grandfather Emilio slept in the restaurant and continued serving locals and Republican soldiers,” he said.

“I believe we’ll resist this too. But how that looks depends on so many factors.”

As early as May 27, restaurants in Madrid and around the country may be able to open at 50% capacity. But that depends on whether or not the region has managed to control the spread of the virus and sufficiently bolster its health system.

The temporary layoff mechanism, which has allowed Casa Botín to keep on its full staff, is set to expire when Spain’s state of emergency ends, but many, including Gonzalez, hope it will be extended for months.

Shops, cultural centers, and hotels will also begin to open over the weeks to come, gradually easing measures until at least late June, when the country will reach – in the words of Prime Minister Pedro Sanchez – a situation of “new normality.”

Until then and likely throughout the year, businesses will have to cope with the fear of coronavirus, fewer tourists, reduced occupancy, and meticulous hygiene measures bordering on obsessiveness.

Gonzalez says he is considering buying an arc-like apparatus that will spray clients with ozone to disinfect them and take their temperatures before entering the restaurant.

The commercial group Hospitality in Spain has warned COVID-19 could spell the end for as many as 85,000 of the country’s 315,000 bars and restaurants.

According to The Economist magazine, Spain’s economy, where hard-hit sectors like retail, transport, and hospitality make up 24% of the GDP, is the second-most vulnerable to lockdowns among all member countries of the Organization for Economic Co-operation and Development (OECD).

At the peak of the crisis, hospitals across the country were teetering on the brink of collapse.

Spain is now slowly emerging from the crisis, but the virus is nowhere near eradicated. Prime Minister Sanchez has said a full return to normality will not be possible until a vaccine or effective treatment is available.

As a consequence, the Spanish government predicts the economy will shrink by 9.2% in 2020, with the GDP estimated to have contracted by 5.2% in the first quarter.

“It’s twice as bad as what we saw during the worst of the [2008] financial crisis, and the GDP drop in the second quarter of the year could easily be three times greater.”

Talavera, like Spanish government officials, believes there will be an economic rebound in the second half of the year.

But a second wave of the virus and a reactivation of lockdown measures could make the dire situation even worse.

“What’s important to remember is that forecasts are based on certain assumptions, and there are a lot of unknowns at this time,” he said.

Consumer confidence has dropped to levels unseen since the financial crisis.

According to a report published on Tuesday by the Spanish Center for Sociological Investigation (CIS), 49.7% of respondents said they are just making it through the end of each month without saving a penny.

Over 66% believed the situation in Spain will be worse in six months than it is today.

Asked if the pandemic could spark another financial crisis in the country, Talavera said he was relatively optimistic.

“The banking sector today in Spain looks a lot stronger than it did 10 years ago. There is a strong increase in capital buffers, but the question for the banking sector, and more broadly for the whole corporate sector, is the length of the crisis. If it lasts too long, we’ll start to see bankruptcies and non-performing loans,” he explained.

The government also predicts unemployment will rise beyond 19% this year, although that does not take into account temporary layoffs.

There has already been a marked rise in people struggling to feed themselves, and food banks across the country have reported a surge in demand.

Caritas, one of Spain’s main charities, said requests for assistance in Madrid have tripled since the start of the lockdown.

Of those seeking help, 40% were doing so for the first time, the charity said in a press release.

Jose Alberto Concha Gonzalez, owner of the Don Paco Hotel in the beach town of Llanes on Spain’s northern coast, told Anadolu Agency that government assistance for his workers and his business has still not arrived.

“The government help has been all words, no action,” he said.

“People who have the right to credit or unemployment simply haven’t been paid. The administration is overflowing and the bureaucracy is complicated. We’re drawing on our savings, just like other people confined to their homes. We can’t wait much longer.”

He has little hope for the spring season but expects domestic tourism to pick up again in July and August, saying a “good number of rooms” have already been booked for those months.

Gonzalez hopes his location in a relatively unfrequented region of the country will work in his favor this year.

Over time, he feels the coronavirus pandemic could bring about a permanent paradigm shift away from packed beaches and crowded tourist destinations.

For now, though, he is just trying to figure out how to get through 2020.

“Hygiene is going to cost us more and we don’t want to leave our employees behind, but at the same time the business has to be viable,” he said.