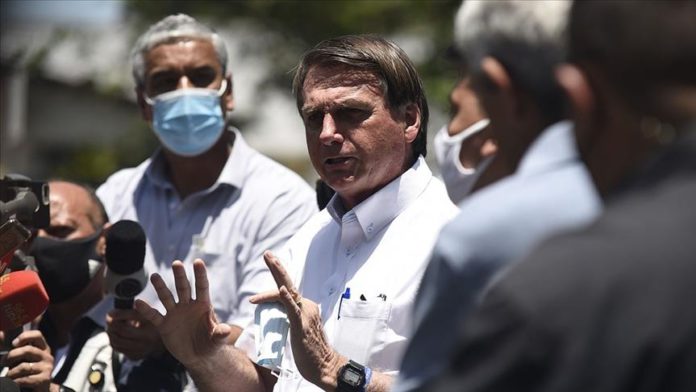 Brazilian President Jair Bolsonaro told supporters Thursday if there is no printed vote in 2022, Brazil will have a worse problem than the US.

Bolsonaro, who has been completely silent on social media since protesters Wednesday stormed the US Capitol, again supported “electoral fraud” in the US election without evidence.

“The lack of confidence” in the elections led to “the problem that is happening there,” he said.

His remarks are at odds with world leaders who unanimously criticized the actions of supporters of US President Donald Trump that resulted in the deaths of four people and injured 16 police officers.

“If we don’t have the printed vote in 2022, (or) a way to audit the vote, we’re going to have a worse problem than the United States,” Bolsonaro told supporters.

Foreign Minister Ernesto Araujo tweeted Thursday about the riots in the US.

In a long note, full of dubious words, Araujo failed to condemn the attacks, defended the protesters, and said: “It must be recognized that a large part of the American people feels assaulted and betrayed by their political class and distrust the electoral process.”

He said “people’s right to demand the proper functioning of their institutions is sacred” and argued that Wednesday’s events in Washington “are not an excuse, in the US or in any country, to put any institution above popular scrutiny.”

The statements drew criticism on social media and from media in Brazil.

Elections in Brazil have been held since 1996 with the use of electronic voting machines, a system that has proven to be safe from fraud.

Even after being elected in 2018, with 55.1% the vote, Bolsonaro disputed the outcome, saying he would have won in the first round.

In March 2020, he claimed the election was rigged but never presented evidence to support his claim.

Despite the accusation, a recent survey showed 73% of Brazilians favor keeping the electronic system. Twenty-three percent say paper voting should be used again.

He did not make clear what the doubts were, nor show evidence they existed. As is the case in the US under Trump, in Bolsonaro’s Brazil the electoral fraud narrative has a lot of currency among his supporters.

Bolsonaro said Thursday that in the US, votes were “boosted” by the possibility of sending ballots by mail “because of this history of pandemic and there were people who voted three, four times, dead people voted, it was a (chaos) there. No one can deny that.” Like Trump, he did not present evidence.

Brazilian leaders have spoken out against the attack on Capitol Hill. In addition to the heads of Congress and members of the judiciary, former Brazilian presidents Luiz Inacio Lula da Silva and Fernando Henrique Cardoso wrote about the events on social media.

“The invasion of the Capitol reveals crudely what happens when you try to replace politics and respect for voting with lies and hatred, even in a country that likes to present itself as the champion of democracy,” wrote Lula.

He said, for Brazil, “it is a warning about what can happen even worse here if Bolsonaro’s authoritarianism and his militias are not contained if violations of freedom and rights continue to be tolerated.”

Cardoso, in a milder language, called the attack “unfortunate” and “a serious attack on democracy,” accusing Trump of not responding. “His dubious words, casting doubt on the elections, are unacceptable to all Democrats in the world. My total disgust at attempts to win at any price.”

Vice President Hamilton Mourao told the media what happened “are internal US issues that will have to be resolved by the new government and in accordance with the law.”