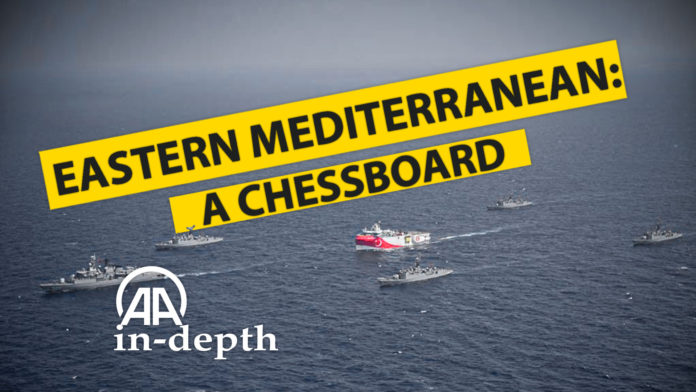 The conflict over hydrocarbon reserves discovered in the 1990s, and the lack of mutual restrictions under a common maritime jurisdiction agreement, have led to steadily rising tension in the Eastern Mediterranean.

Especially in recent weeks, significant new developments in the region led to a standoff between Turkey and the Turkish Republic of Northern Cyprus, against Greece and Greek Cypriot administration.

Enlisting Egypt, Israel, and Italy to their side, the Greece-Greek Cypriot duo is actively trying to exclude Turkey from the region, while Turkey is sending a clear message that it will use all of its diplomatic and military means to protect its rights in the region.

Therefore, Turkey on July 21 issued a Navtex announcing that its Oruc Reis seismic research vessel will start its activities between the islands of Meis and Rhodes.

Not long after that, Greece announced on Aug. 6 that it had signed a restrictive maritime jurisdiction agreement with Egypt.

Turkey described this deal as “null and void” and resumed its activities in the region.

Tension in the region escalated when Turkish and Greek navy frigates encountered each other on Aug. 13.

This event raised the following question: Are hot clashes in the Eastern Mediterranean a real possibility?

Lastly, Turkey issued another Navtex on Aug. 16 for the exploration area of its drillship, saying: “Everyone is strongly advised to keep out of the Yavuz drill ship’s exploration area.”

So what are the reasons for the tension that has been going on in recent weeks in the Eastern Mediterranean?

What do the restrictions under maritime jurisdiction agreements between Turkey and Libya on one hand and Greece and Egypt on the other foreshadow?

What are the parties’ conflicting arguments?

Is Greece at conflict with itself in terms on its rights over the Aegean islands?

Who wants what in the Eastern Med?

Anadolu Agency delves into these questions by speaking with expert analysts.