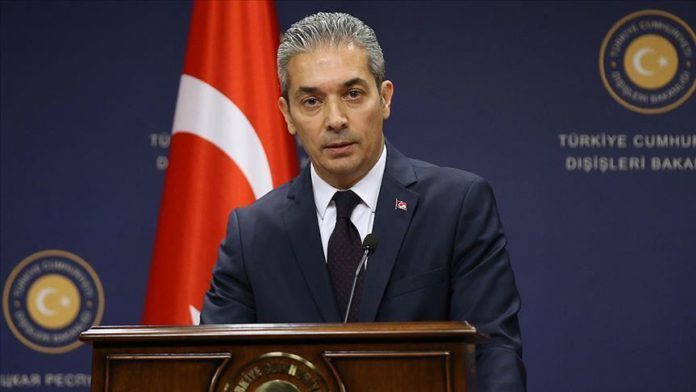 Turkey on Friday called on the EU to stop threatening the country and adopt a tangible and impartial approach to ongoing tensions in the Eastern Mediterranean.

Turkish Foreign Ministry spokesman Hami Aksoy said in a statement that Turkey sought to reduce tensions with the bloc and that Ankara displayed its goodwill by responding positively to calls for dialogue, citing an earlier statement this month following an EU summit where it said Turkey expected tangible steps from the union.

Arguing that the EU ignored Turkey’s theses and took a biased attitude on the issue, Aksoy went on to say that his country was determined to defend its rights, along with those of the Turkish Republic of Northern Cyprus (TRNC), in the region.

According to the official, Turkey was not surprised that the EU viewed its determination as provocative, adding that the bloc’s attitude did not encourage a positivity between Turkey and the EU and that its language was far from sincere and constructive.

He called on the body to work towards resolving the outstanding issues by respecting the rights of Turkey and the TRNC in line with common interests and stop yielding to the “spoiled” and “irrational” demands of Greece and the Greek Cypriot administration.

The EU leaders summit had issued a declaration claiming Turkey was acting unilaterally in the Eastern Mediterranean and that the EU regretted provocative moves by the Turkish government.

German Chancellor Angela Merkel, for her part, called for de-escalation in the region and closer dialogue between Ankara and Brussels.

Turkey, which has the longest continental coastline in the Eastern Mediterranean, has rejected maritime boundary claims of Greece and the Greek Cypriot administration in the region and stressed that these excessive claims violate the sovereign rights of both Turkey and the Turkish Cypriots.

Ankara has sent several drill ships and seismic research vessels in the past weeks to explore for energy on its continental shelf, asserting its own rights in the region, as well as those of the TRNC.