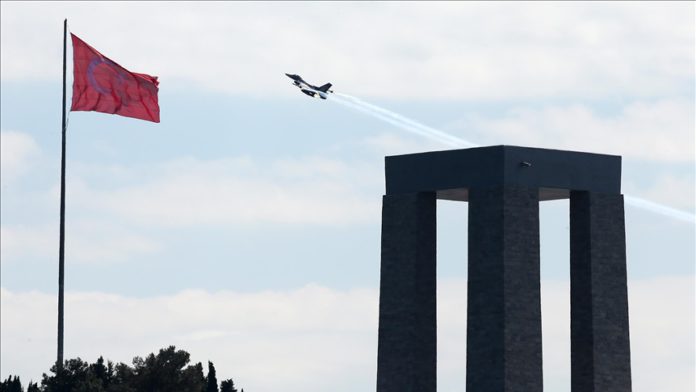 Turkey is set to have another busy foreign policy year in 2021 that is expected to be marked by multilateralism and flexibility.

After an active 2020 with the country’s humanitarian and proactive foreign policy, Turkish policy is likely to focus on prominent agenda items including developments in the Gulf and Middle East, as well as the new US administration, issues on Cyprus and the EU and Russia.

Signals coming from Turkey’s diplomatic missions indicate Ankara is planning to prioritize diplomacy in its foreign policy once again, but will not refrain from taking action and using its “smart power” if the need arises.

The end of the Gulf Crisis — which began in 2017 when Saudi Arabia, the UAE, Egypt and Bahrain imposed a blockade on Qatar — is of great importance for Turkey, which has advocated dialogue since the eruption of the ordeal. The reconciliation process has the potential to affect Ankara’s relations with regional actors, such as Riyadh and Cairo.

Turkey currently maintains contacts with Egypt via intelligence agencies and foreign ministries to improve bilateral ties, with both countries trying not to oppose each other on international platforms. Further, there are intentions in both countries to work on a “roadmap” to fix bilateral ties.

Relations between Ankara and Riyadh also appear to be in a positive dynamic. Turkish President Recep Tayyip Erdogan’s telephone call with Saudi King Salman bin Abdelaziz ahead of a G-20 Leaders Summit, as well as positive remarks on Turkey by Faisal bin Farhan Al Saud, the Saudi foreign minister, indicate relations might improve in 2021.

Biden era in US

Turkey and the US share deep historical bonds and stand as NATO allies. But, the two have yet to resolve issues that have emerged recently.

Some of the most thorny of these issues are the US support to the YPG — the Syrian offshoot of the PKK terror group that has killed tens of thousands of people in Turkey; free movement in the US of members of the Fetullah Terrorist Organization (FETO) which is behind a deadly failed coup attempt of 2016; the extradition of FETO ringleader Fethullah Gulen from the US; Ankara’s procurement of Russian S-400 missile defense systems and sanctions imposed on Ankara as a result of the Countering America’s Adversaries Through Sanctions Act (CAATSA).

While Turkey has signaled it is ready to continue relations with President-elect Joe Biden, who is set to take the presidency Jan. 20, and take essential steps to resolve those issues, the coming US administration has also pointed to the importance of ties with Turkey, a NATO ally and key regional actor. Both countries have agreed to establish a joint working group to discuss CAATSA sanctions.

In April 2017, when protracted efforts to buy an air defense system from the US proved futile, Turkey signed a contract with Russia to acquire its state-of-art S-400 missile shield.

US officials voiced opposition to their deployment, claiming they would be incompatible with NATO systems and would expose F-35 jets to possible Russian subterfuge.

Turkey, however, stressed that the S-400s would not be integrated into NATO systems, and poses no threat to the alliance or its armaments.

Anticipation of ‘positive agenda’ with EU

Despite a tense period in EU-Turkey ties last year — partly due to the escalatory behavior of some member countries — the two sides are expected to share a “positive agenda” in 2021.

EU Council President Charles Michel and Commission President Ursula von der Leyen are set to visit Turkey, with the main issue up for discussion being the 2016 migration agreement, visa liberalization and updating of the Customs Union Agreement.

Turkey, which seeks to become a full member of the union as one of its strategic goals, has declared it would in the near future undertake reforms, which might contribute positively to relations with the bloc as Turkish-EU ties are expected to gain momentum in the new year.

As for developments during the past year in the Eastern Mediterranean, Turkey still favors a fair solution to the ongoing dispute in the region surrounding energy drilling rights; Brussels and Ankara are still working for a multilateral conference to tackle these disputes.

In another positive move, Turkey in late 2020 limited activities of one of its drilling vessels, the Oruc Reis, to the gulf its southern province Antalya.

Amid recent tensions in the region, Greece and the Greek Cypriot administration increased pressure on other EU members to impose sanctions on Turkey during the EU leaders’ summit Dec. 11.

Turkey, which has the longest continental coastline in the Eastern Mediterranean, has rejected maritime boundary claims of Greece and the Greek Cypriot administration and stressed that the excessive claims violate the sovereign rights of both Turkey and the Turkish Cypriots.

Ankara has sent several drill ships in the recent weeks to explore for energy resources in the Eastern Mediterranean, asserting its own rights in the region, as well as those of the Turkish Republic of Northern Cyprus.

After Turkey’s relations with EU member France soured recently, the two countries now appear to be moving toward normalization within the context of bilateral ties with members of the bloc.

Comments from political actors suggest parties are working on a “roadmap” and will re-establish relations.

In addition, Turkey has repeatedly said it was ready to sit at the negotiating table with Greece to resolve outstanding issues through exploratory talks.

Turkey and the Turkish Republic of Northern Cyprus (TRNC) are currently pushing for a two-state solution to the dispute on Cyprus after talks for a federation model on the island have gone nowhere after 52 years.

The two-state solution proposal is expected to be discussed in 2021, under an unofficial 5+UN format.

The island of Cyprus has been divided since 1974 when a Greek Cypriot coup was followed by violence against the island’s Turks and Ankara’s intervention as a guarantor power.

– Support for Azerbaijan to continue

One of the most significant developments in 2020 for Azerbaijan and its ally, Turkey, was the liberation of lands in the Upper Karabakh region that had remained under Armenian occupation for decades.

The relationship between the two countries, often dubbed as “one nation, two states,” is set to make its mark in yet another year.

– Perspective of normalization with Israel

While Turkey and Israel have conducted their relations on the level of charge d’affaires instead of ambassadors since 2018, recent comments by politicians suggest 2021 may see improved relations.

Erdogan previously said both countries held talks at the intelligence level and that the main reason behind the dispute was Israel’s policies on Palestine.

The Turkish leader also said his country wanted better relations with Tel Aviv, indicating it could be achieved in coming days if necessary conditions came to pass.

Foreign Minister Mevlut Cavusoglu, for his part, said there were multiple mechanisms and institutions through which Israel and Turkey could establish communications.

He also noted the possibility of energy cooperation, namely by carrying Israeli hydrocarbons through Turkey, which he said would be an efficient route.

Turkey has indicated it would continue in 2021 to back the ongoing political process to end the Syrian conflict.

With its military campaigns — Euphrates Shield, Olive Branch, Peace Spring and Spring Shield — Turkey made significant gains in its fight against terrorism and is likely to step up its efforts to ensure the safe return of Syrian asylum seekers to their native country.

Cavusoglu confirmed that Turkey would prioritize the return of Syrians and the political dialogue in the country in 2021.

Another major issue for Turkey in Syria this year is set to be the failure of the US and Russia to make good on their promise to push the YPG/PKK terror group from a strip of land stretching 30-kilometers (19 miles) deep from Syria’s northern border with Turkey.

Similarly, Turkey is expected to support the legitimate Libyan government and the political process in the North African country.

Turkey’s relations with Asia, which has begun to emerge as the world’s economic center, is likely to pick up speed in line with Ankara’s “Asia Anew” policy launched in 2019 to boost ties.

As part of this policy, Turkey formed an action plan for activities in more than 30 countries. Furthermore, the country is likely to play an important role in the Belt and Road initiative and the revival of the Silk Road.

Despite the fact that Turkey and Russia stood at different sides in Syria, Libya and Azerbaijan, they still managed to maintain emphasis on dialogue and are expected to keep channels open in 2021, despite the challenges.

As for Syria, both sides are expected to maintain cooperation on their March 5, 2020 cease-fire agreement in Idlib and keep negotiations going in the Astana format.

On March 5, Erdogan and Russia’s Vladimir Putin announced they reached a cease-fire agreement in Idlib, the last opposition stronghold in Syria, between opposing rebels and Bashar al-Assaf regime forces.

At the same time, they appear set to continue cooperating in line with their joint observatory center in Azerbaijan following Baku’s recent victory against Armenian forces in Upper Karabakh.

On top of these, Turkey and Russia are expected to maintain dialogue on other issues related to the S-400 air defense systems, as well as the Akkuyu Nuclear Plant, TurkStream pipeline and tourism.