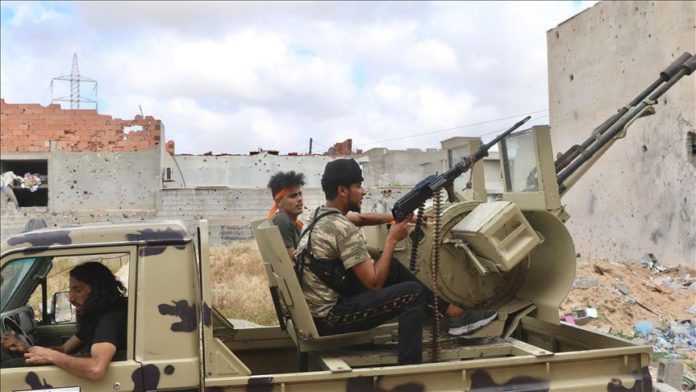 A report by a UN Panel of Experts said the foreign mercenaries were affiliated with Lancaster 6 DMCC and Opus Capital Asset Limited FZE, both registered at free zones in the UAE, American news outlet Bloomberg reported.

They traveled to Libya in June 2019 for a “well funded private military company operation” to support Haftar’s offensive against the Libyan government.

The report was shared with the UN Security Council’s (UNSC) sanctions committee in February, according to two diplomats who spoke to Bloomberg.

They told Bloomberg that the two companies supplied “Haftar’s forces with helicopters, drones and cyber capabilities through a complex web of shell companies.”

The diplomats said the mercenaries “promised a sophisticated operation that could interdict arms shipments from Turkey to the government of Tripoli using vessels and helicopters.”

“The report found that six former military helicopters were acquired and sent to Libya for the project in what it described as non-compliance with a UN resolution for an arms embargo on Libya,” read the Bloomberg report.

However, after arriving in Libya in late June 2019, the group of 20 people led by South African national Steve Lodge “abruptly pulled out a few days later” on two boats to Malta, it added.

UN investigators said in the report they were unable to determine the reason for the team’s exit.

The UN report said one of the companies, Lancaster 6, is headed by former Australian air force pilot Christiaan Durrant.

According to the company’s website, he worked for Frontier Services Group until 2016, a group founded by Erik Prince, the former head of Blackwater Worldwide, read the Bloomberg report.

“There’s no suggestion in the report that Prince or any company with which he is affiliated had any role in his former employee’s mission,” it said.

The Bloomberg report said UN officials declined to comment on the matter “as the report is not public.”

It explained that the UNSC “is not required to take action on the report but members can refer it for investigation in their own countries.”

Since April 2019, the government has been under attack by warlord Khalifa Haftar’s forces, based in eastern Libya, and more than 1,000 people have been killed in the violence.

Libya: Woman killed by mine planted by Haftar militia