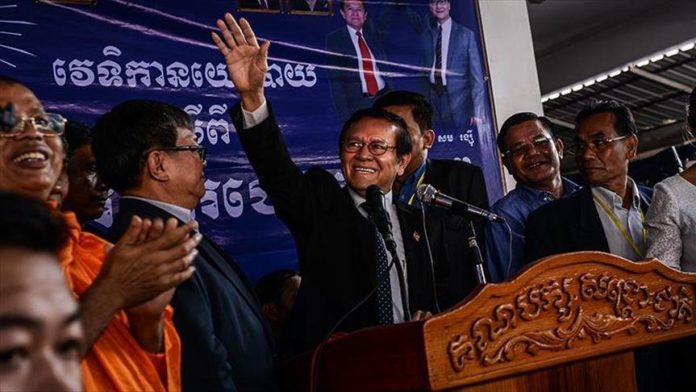 As the trial of Cambodian opposition leader Kem Sokha resumed after a two-year delay, regional support for him has grown with calls for dropping charges against him.

In a statement on Friday, Southeast Asian parliamentarians urged Cambodian authorities to “immediately and unconditionally drop the treason charges against him.”

“The arbitrary arrest and politically-motivated treason charges against Sokha have no place in a normal and functioning democracy,” said Kasit Piromya, a board member of ASEAN Parliamentarians for Human Rights (APHR).

“This is just another example of how the rule of law has existed by name only under Prime Minister Hun Sen’s government. The arrest of Kem Sokha in 2017, and the subsequent dissolution of Cambodia National Rescue Party (CNRP), was clearly aimed at eliminating any true political opposition for the 2018 elections, and beyond,” said Piromya, a former Thai member of parliament.

A month later in November, the kingdom’s Supreme Court dissolved the CNRP for allegedly attempting to overthrow the government, and banned 118 of its members from politics for five years.

In the July 2018 general elections, the CNRP was banned from participation.

Sokha, leader of the now-dissolved CNRP, was put under house arrest after being detained in Cambodia’s Tbong Khmum Correctional Center.

The trial began in January 2020 but Cambodian authorities stopped it from going forward in March that year citing COVID-19 concerns.

“The politically-compromised courts have allowed the case to drag on, citing the COVID-19 pandemic as the reason for the delays, as prosecutors fail to produce substantive evidence, fully aware that a prolonged trial could mean stopping Kem Sokha from any political activity,” the APHR said.