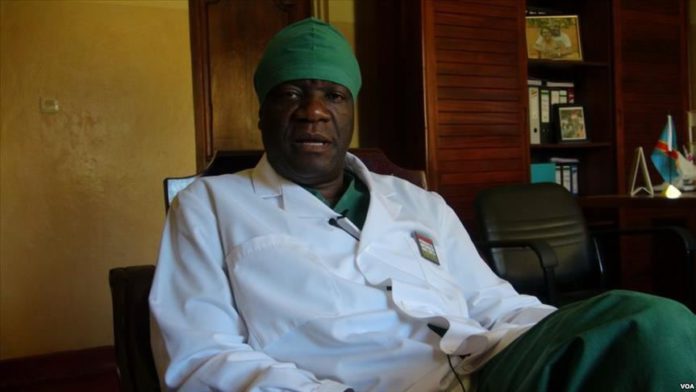 Mukwege, 65, has recently faced a barrage of threats over his campaign for accountability, justice, and end to violence in the Democratic Republic of Congo (DRC).

In a tweet last week, he condemned the relentless violence in the northeastern Ituri province and called for an “independent & impartial tribunal … an International Criminal Court for DRC and/or mixed specialized chambers.”

Mike Hammer, US ambassador to the DRC, termed the threats “unacceptable.”

“We are concerned about the continuing brutal violence that is taking so many innocent lives in Eastern DRC & the unacceptable threats against @DenisMukwege,” he tweeted.

“Calls for accountability for violence in eastern DRC are essential to build lasting peace.”

Canadian envoy Nicolas Simard called for an end to impunity in the country.

“It is unacceptable that life threats could be made against him [Mukwege] as violence worsens in Eastern DRC. We urge ending impunity to ensure lasting peace in the region,” he tweeted.

Tibor Nagy, assistant secretary for the US State Department’s Bureau of African Affairs, tweeted late Wednesday: “I echo the call for accountability for any violence committed in eastern DRC and support for the safety and security of all Congolese citizens and human rights defenders.”

Earlier this week, American organization Physicians Human Rights called for immediate action to protect Mukwege, his family members, and others around him.

“During the past several weeks, Dr. Mukwege has been the target of an alarming intimidation campaign, online and offline. He and his family have become the targets of attacks on social media and have received death threats on his cell phone through text messages,” read a statement.

Mukwege, who has spent most of his adult life helping victims of sexual violence in the DRC, won the Nobel Peace Prize in 2018 alongside Nadia Murad for his efforts to end the use of sexual violence as a weapon of war and armed conflict.

The situation in DRC’s Ituri province has significantly deteriorated in recent months.

According to humanitarian organization Save the Children, at least 1,315 people, including 165 children, have been killed and an estimated 300,000 displaced in the region since January.