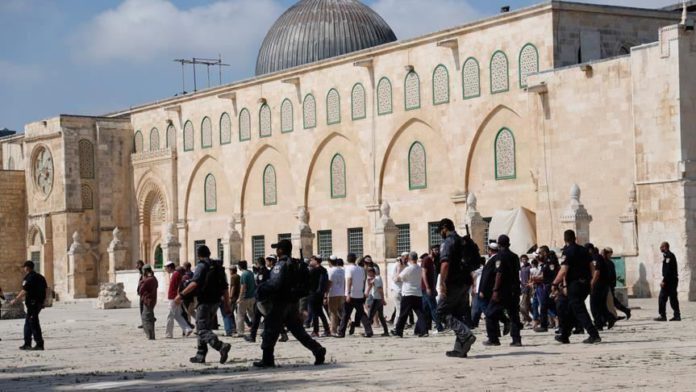 Dozens of Israeli settlers forced their way into Jerusalem’s flashpoint Al-Aqsa complex on Sunday in celebration of the Jewish New Year.

In a statement, the Jerusalem Awqaf Department said 76 settlers backed by Israeli police forces had entered the compound.

According to an Anadolu Agency reporter, the settlers toured the courtyard in celebration of the Jewish Rosh Hashanah, which falls from Sunday to Thursday.

Right-wing Jewish supporters have called on supporters over the past few days to converge on the Al-Aqsa compound to celebrate the occasion.

On Saturday, an Israeli settler attempted to blow in a shofar inside the flashpoint compound, but he was kicked out by the guards.

In a move never recognized by the international community, Israel annexed the entire city in 1980, claiming it as the Jewish state’s “eternal and undivided” capital.