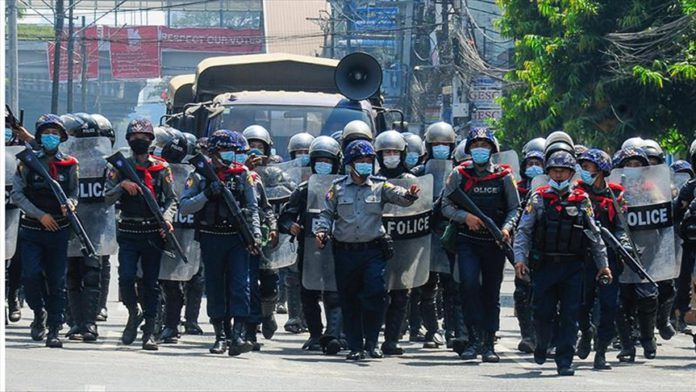 Several people were injured and dozens arrested on Friday in major cities in Myanmar when police tear-gassed and fired live bullets at anti-coup protests.

Warning shots, tear gas, and stun grenades were fired at two major street junctions in Yangon as police used much tougher means of cracking down on anti-coup demonstrators, witnesses said.

Unlike previous days, without advance warning the police clamped down on the demonstrators, said Lynn Myaing, a resident of Yangon’s Hlaing Township. “They seemed to want to make people afraid,” he added.

“Police also went to the residential area in search of the demonstrators,” he told Anadolu Agency, adding that he saw seven protesters being dragged by the police.

A similar incident also occurred in Myaynigone, a street junction in the Sanchaung township of Yangon.

“The police never spared the journalists. A Japanese freelance journalist was arrested by the police,” said a local reporter covering the protest, adding that he also witnessed the arrest of a young boy on a bicycle passing through the police line.

In Mandalay, the country’s second largest city, police arrested at least 30 people during a crackdown on protesters and injured several others, including a child.

“Police fired both rubber bullets and live rounds of ammunition in dispersing the crowd in Mandalay. Police and soldiers on vehicles then indiscriminately fired slingshots at houses on the way back to their bases,” said a member of a volunteer rescue team providing the injured with medical assistance.

“Six people were injured by a soldier’s slingshots, including two boys under the age of 10, who were playing in front of their homes,” he told Anadolu Agency by phone. “The children were wounded in the head and the face,” he added.

Local media outlets reported that security forces also used slingshots, water cannons, and tear gas to disperse demonstrators in the administrative capital Nay Pyi Taw. They say dozens of protesters were also detained in the city during the crackdown.

However, Anadolu Agency has so far been unable to independently confirm these media reports.

Turkish stocks up %2.77 at closing session

March 26, 2020
We use cookies to ensure that we give you the best experience on our website. If you continue to use this site we will assume that you are happy with it.Ok