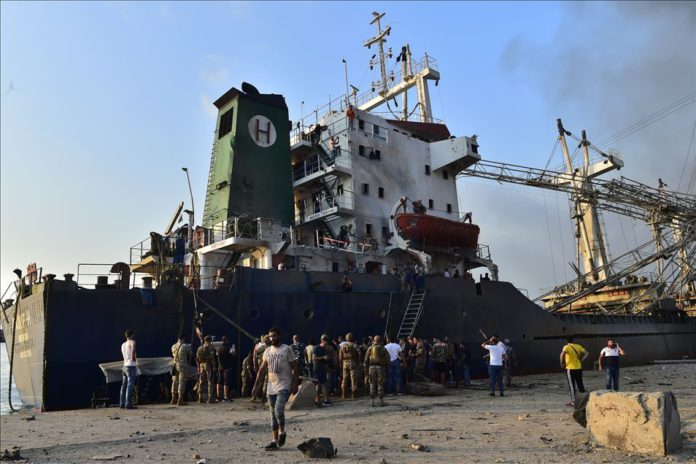 A massive blast in the Lebanese capital Beirut, has left at least 30 people dead and 2,500 others injured, the country’s health minister said Tuesday.

A fire at a warehouse with explosives at the Port of Beirut led to the massive blast which tore down a three-story building and was heard across the city and its suburbs.

BEIRUT, LEBANON – AUGUST 4: People gather around a damaged ship after a fire at a warehouse with explosives at the Port of Beirut led to massive blasts in Beirut, Lebanon on August 4, 2020. A large number of people were reportedly injured in the blasts, while former Prime Minister Saad al-Hariri — who lives near the area of the explosions — is said to be unharmed, according to initial reports. ( Houssam Shbaro – Anadolu Agency )

Footage shared on social media showed smoke from the fire, followed by a large mushroom cloud.

The warehouse stored explosives that had previously been seized, Lebanon’s police chief said.

Lebanese local media claimed that the number of casualties is much higher than the official figures announced by authorities.

Lebanese Prime Minister Hassan Diab said that those responsible for the incident will be brought to account.

Former Prime Minister Saad al-Hariri — who lives near the area of the explosion — is said to be unharmed, according to initial reports. However, nearby buildings, including Al Hariri’s residence and the Beirut Rafic Al-Hariri International Airport, suffered major damage.

Beirut Governor Marwan Abboud, who broke down in tears while speaking to reporters at the blast site, compared the explosion to the horrific nuclear bombings of the Japanese cities of Hiroshima and Nagasaki that instantly killed hundreds of thousands of people.

Also, Nazar Najarian, the leader of Lebanon’s Kataeb Party, died of wounds from the blast.

The explosion came at a sensitive time days before the UN’s Special Tribunal for Lebanon is to announce its verdict in the assassination case of former Lebanese Prime Minister Rafic Hariri.

Later in the day, sources close to Hezbollah denied the allegations that the explosion in Beirut was an attack by Israel on their own weapon depots.