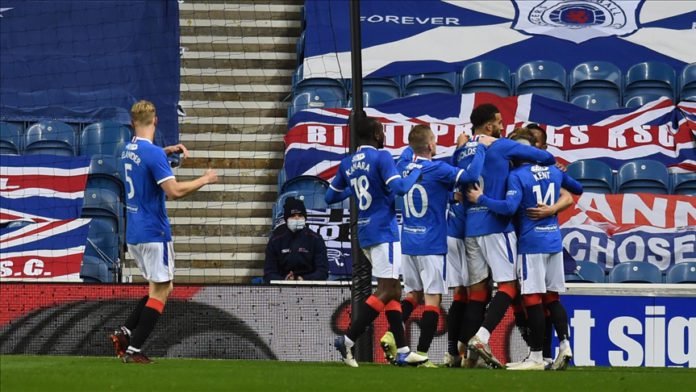 Borussia Dortmund drew 2-2 Thursday with Rangers in a UEFA Europa League knockout round playoff match in Glasgow, but the German club’s European quest ended for losing the tie.

Rangers captain James Tavernier, who plays as a right back, scored double including a first-half penalty as the Scottish team’s English captain led them to the next round in the Europa League.

Dortmund’s English midfielder Jude Bellingham and Dutch forward Donyell Malen scored first-half goals, but the Germans were unable to avoid Tavernier’s equalizer via a half volley in the 57th minute.

Rangers continued their European campaign and are waiting for their opponents in Friday’s last 16 draw.

However, Dortmund have been eliminated and will now focus on the German Bundesliga.

– Barcelona through to last 16, goals galore in Naples

Spanish team Barcelona reserved their place in the Round of 16 after beating Italian opponents Napoli 4-2 in the second leg at Naples’ Diego Armando Maradona Stadium.

Jordi Alba drew first blood, scoring the opener for Barcelona on a counter attack in the eighth minute.

Dutch midfielder Frenkie de Jong doubled the lead for Barca, curling the ball into the top corner of the net in the 13th minute and scoring a classy goal.

Italian winger Lorenzo Insigne scored a penalty to narrow the gap for Napoli after a VAR review that Barcelona goalkeeper Marc-Andre ter Stegen fouled Napoli forward Victor Osimhen on the edge of the area.

The visitors’ defender Gerard Pique scored the third goal for Barcelona near the end of the first half, making it 3-1.

Barcelona’s winter signing Pierre-Emerick Aubameyang made it 4-1 in the 59th minute after Adama Traore’s low pass in the area. De Jong stepped it over to trick Napoli’s defense and let Aubameyang kick the ball to score.

Napoli forward Matteo Politano scored in the 87th minute to finalize the result of the match. The Italian player took advantage of a mistake by Barcelona’s defense in the box and unleashed a low shot to beat Ter Stegen.

The first leg at Barcelona’s Camp Nou Stadium was 1-1, so Barcelona won 5-3 on aggregate to reach the Round of 16.

Before the match, both Napoli and Barcelona’s players displayed a massive banner that said “Stop war,” referring to Russia’s military intervention in Ukraine.

The Europa League last 16 draw will take place on Friday in Nyon, Switzerland.

These eight were the 2021-22 Europa League group winners, so in December 2021, they directly qualified for the Round of 16.

Teams from the same country cannot face each other in the Round of 16.

The first leg matches will be held on March 10, and the second legs will be played on March 17.