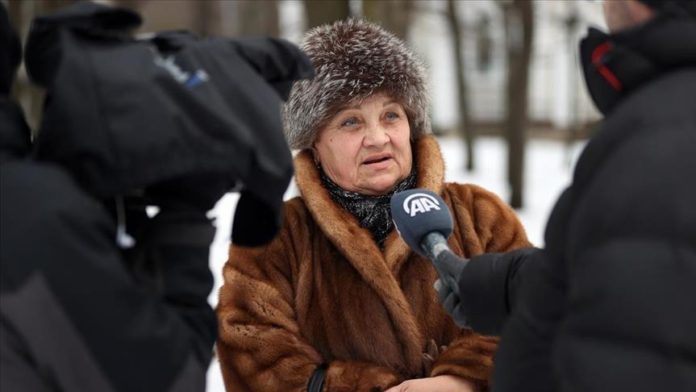 Speaking to Anadolu Agency, a resident of Kramatorsk — an industrial city that fell to pro-Russian separatists in 2014 before the Ukrainian army regained control, underlined that ties between Ankara and Kyiv are “good,” and that Turkiye’s mediation would be “be better than (that of) the US, which wants to interfere here (in Ukraine’s affairs).”

“The thing that Turkiye provided Ukraine, the unmanned aerial vehicles (UAVs), and the joint production that seems to be underway, is very good and very wonderful,” said a pensioner in the city, who did not want to be named.

“The way President Erdogan speaks about Ukraine is like a father’s care, he’s ready to help with all means,” he added.

He also stressed that in general, only “positive thoughts are evoked by Turkiye’s role” in resolving the conflict in Ukraine.

Another resident of the city, located in the region of Donetsk in Donbas, said she hopes Ukraine’s friendship with Turkiye will continue and that she believes that Ankara will help her country.

Everyone should help each other

“I, like any other person who feels that someone wants to help them, think that (Turkiye’s support) is normal. Everyone should help one another. The more powerful helping the less powerful. I think it’s all natural. I think whoever helps us is close to us, if not our brother,” said another resident, Yuriy Rud.

Rud underlined that once Ukraine is back on its feet after the conflict is over, it “will definitely return (the favor) that Turkiye provided.”

He added that Erdogan was coming to Ukraine “in peace.”

Rud went on to say that whoever helps Ukraine, Kyiv will do the same back, but that “whoever kicks us, tramples our ground, will get what he deserves.”

“Now, we feel there are close countries that help us. We’re calmer now. When we were alone, it wasn’t easy,” he said.

Another pensioner asserted that Erdogan’s visit to Kyiv would help boost relations.

“I think there’ll be some help provided to Ukraine. The UAVs (Turkiye provided) are very good … it’s great that they’re helping Ukraine,” she said.

“Ukraine is a peaceful country. But, wherever Russia goes, there is also war, starting with Karabakh (region of Azerbaijan), and so on in Moldova, Syria, Lebanon. It (Russia) is everywhere (causing conflict). It’s just an aggressor country. That’s what I think,” she added.

Erdogan said on Tuesday that his country does not want war between Russia and Ukraine and hopes tensions are resolved peacefully.

“We would never want a war between Russia and Ukraine. This is not a good omen for the region. As a NATO country, we do not want such a thing, we do not accept it … I hope we can resolve this peacefully,” he noted.

The Turkish president has said on multiple occasions in recent weeks that he is ready to host the leaders of Russia and Ukraine to help calm the tensions between their countries.

NATO last week rejected Russia’s demands to withdraw its troops and weapons from Eastern Europe and to halt the integration of Ukraine, urging Moscow to focus on diplomatic engagement and to start talks on arms control.

Thousands of Palestinians flock to Al-Aqsa Mosque to celebrate truce