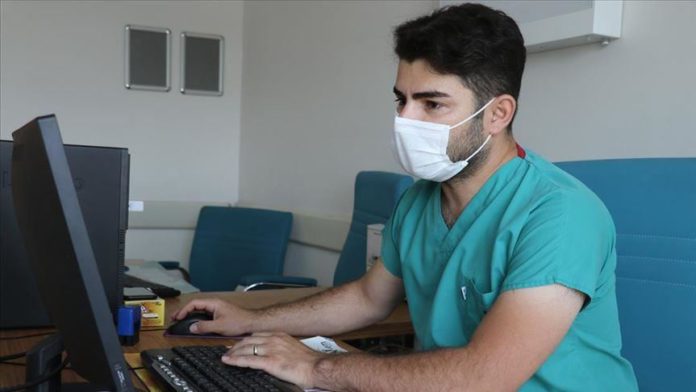 Doctors who contracted COVID-19 while treating patients in eastern Turkey recalled their ordeal.

Dr. Oktay Polat at the Agri Training and Research Hospital said he was treated for 13 days after contracting the virus.

Stating he had terrifying pain in the first few days, he said: “I did not have enough strength in my body to even lift a pen. My breathing became difficult in the following days. I could not sleep even for a minute during the first eight days.”

“They gave me sleeping pills but none of them had any effect,” Polat added.

When he looked outside the hospital window, he said he saw people smoking and walking around without a mask.

“I wished they could see what I was going through and what difficulties I was having.”

He went on to say the general impression that younger people have it easy is wrong.

“I suffered. It caused shortness of breath and I had to be taken into intensive care.”

Chest diseases specialist Dr. Mine Oguz at the Kars Harakani State Hospital said the first positive case in the province was diagnosed in a patient she treated.

Oguz said she contracted the virus from her patient before they were discharged.

“My friends were having 24-hour shifts and they were very tired, so I immediately volunteered to be in the rota after my isolation process ended,” she said. “At first, we thought that patients who are aged 35-50 would not need intensive care, but we were wrong.”

The doctor said they also experienced emotional scenes at the intensive care units.

”We had a patient with a two-month-old baby. She had to breastfeed her child, but the mother and everyone in the house had the virus. It was very risky to send her home.

“The mother could not even kiss her baby, that hurt us.

“We lost patients. We were very sorry for them because no doctor wants to lose their patient. Sometimes we don’t sleep the entire night. It drains us emotionally.”

*Writing by Yunus Girgin from Ankara

Syrian artist’s works to be displayed in Istanbul