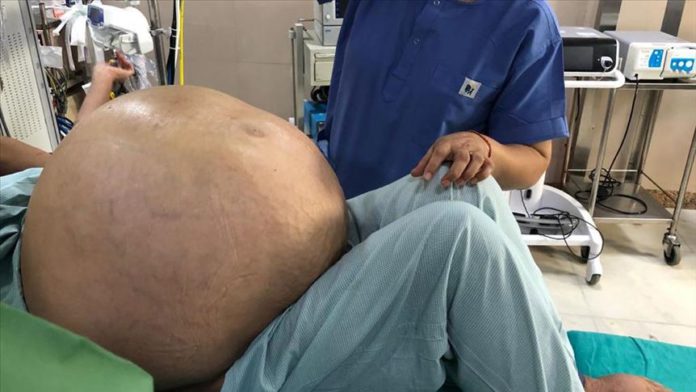 Doctors at a private hospital in New Delhi removed the world’s largest ovarian tumor from a 52-year-old woman’s body.

The 54 kilograms (119 pounds) tumor, which was removed during a 3.5-hour operation, was half the patient’s weight.

“In over 30 years of my experience as a surgeon, I have never come across a case where the tumor weighed almost half the person’s body weight,” said Arun Prasad, senior consultant, surgical gastroenterology and bariatric surgery at Indraprastha Apollo Hospitals.

The patient, who is a resident from Delhi, had been gaining weight in recent months and reached 106 kilograms (234 pounds). She faced difficulties breathing, walking and had acute pain in her abdomen, the hospital said in a statement.

It further said that there was no space in the woman’s abdomen to insert equipment via robot-assisted methods, thus the surgical team performed traditional surgery Aug. 18.

“Due to the giant tumor, the intestinal tract throughout was compressed and flattened which was putting pressure on the gut leading to the risk of rupture in the ovary,” said Prasad. “Fortunately, the tumor was benign and the patient had no co-morbidities, which enabled a faster recovery. Post-surgery her weight dropped to 56 kilograms (123 pounds).”

In 2017, a 34 kg (75 pound) tumor was removed for a female patient ovaries in the southern city of Coimbatore.