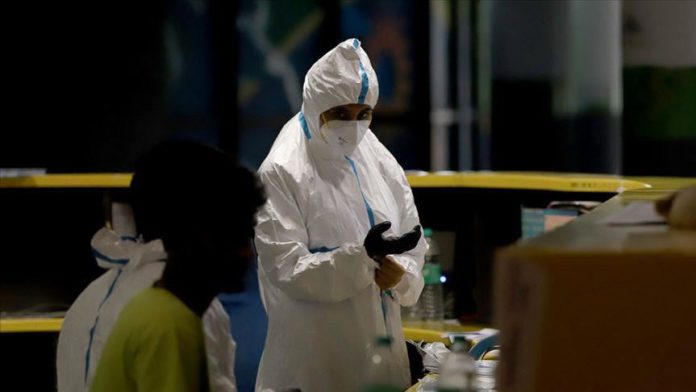 The misery of doctors and frontline staff in the war against the novel coronavirus is surging in Bangladesh with at least 92 physicians having died due to the disease.

The country reported 2,199 more infections as of Saturday with 21 additional deaths as the virus shows no indication of slowdown, according to the health ministry data.

Infections among doctors are raging and have already spread across the country as authorities allegedly failed to stop cases by taking proper measures even after the first COVID-19 case was detected March 8.

When infections were taking its toll among physicians in Dhaka, it could have also been controlled but new cases are spreading to other parts of the country, according to doctors, experts and associations.

The Bangladesh Medical Association (BMA) said in its latest data updated on July 30 that there were 2,458 doctors who have contracted the virus, raising the number of infections among health workers to 7,086.

ASM Mahbubur Rahman, a government doctor, has been a COVID-19 patient twice.

Rahman first contracted the virus while working April 28 at the civil surgeon office in the Jamalpur district that shares an international border with the Indian state of Meghalaya in the northeast.

“During my tenure I had to conduct field visits to the hospitals in the districts and other routine jobs where we have to meet general people and do issues related to public health services, and I might have gotten infected by any of those,” he told Anadolu Agency.

“My wife, also a doctor, also tested positive after 15 days of my recovery. And then our only daughter has been taken to the house of my father-in-law in order to save from virus transmission,” he said.

Rahman recently was made an assistant director at the Directorate General of Health Services (DGHS) under the health and family welfare ministry where he again tested positive, and since July 10 is taking treatment for COVID-19 from home.

It is difficult for a government to maintain all the things, so respective institutions and hospitals should provide necessary safety gear, including ensuring sufficient personal protective equipment (PPE) and monitor health guidelines, said Rahman.

“There are lack of trained and skilled manpower and technical hands in the health services; at least two people are needed to do off a PPE in a right manner otherwise it could contaminate others,” he said, adding, “if health care institutes could ensure those needs then infections among doctors could be controlled.”

The chair of the Bangladesh Doctors’ Foundation (BDF), an association of doctors, told Anadolu Agency infections and deaths from the virus has kept coming and has already spread to other parts of the country which was earlier mostly found in Dhaka.

Shahed Rafi Pavel said at least 80 doctors died from COVID-19 while 12 others died with COVID-19 symptoms. But the BMA said at least 69 physicians have died.

And there were some issues, including insufficient health safety gear in line with guidance from the World health Organization (WHO), arrangement for treatment, transportation facility and residential safety for on-duty doctors at COVID-19 dedicated health care facilities that leave them exposed to the virus and spread the infection, according to Pavel.

There are allegations and reports of mismanagement in the arrangement of hotels, food and transportation for doctors who have to work in COVID-19 dedicated hospitals.

The government addressed some of those issues and was trying to meet other demands raised by physicians, added Pavel.

“But still doctors receive low standard food items and there is a small gap between two shifts of duties; while the healthy gap in shifts and good foods are needed for the survival of doctors in such a pandemic,” he said.

BMA Secretary General Md. Ehteshamul Huq Choudhury, admitted there were shortcomings in the beginning but the situation is improving and the infection rate among doctors is decreasing with efforts from authorities.

He described to Anadolu Agency that “sometime patients hide being a COVID-19 carrier and travel history in virus hit areas which do infect health workers.”

He emphasized providing information to doctors during treatment so the treatment seeker and giver can benefit and called for “changing people’s attitude towards doctors in the country while seeking treatment.”

“Families of doctors infected also bear the burnt as dedicated doctors can’t meet family members for long and can’t meet demands of their families due to their service in the pandemic,” according to Choudhury.

He emphasized training needs to ensure safety when workers take off their PPE and come off duty as many are infected.

The government appointed about 10,000 health workers to the health service in recent months; while more that 2,000 doctors are in the pipeline to be appointed in an attempt to ease pressure on existing doctors during the pandemic, according to DGHS.

Aysha Akhtar, an assistant director at DGHS told Anadolu Agency the “government has already announced that health workers, including doctors, will come under a government-run health insurance package if they contract the virus; in line with their respective portfolio in government services.”

The government is providing necessary safety gear as demanded, dedicated a hospital in Dhaka for health workers on a priority basis and dedicated seats at another, she said.

The government is working to ensure quality food and hotels for doctors who are working in coronavirus dedicated health care, Aysha added.