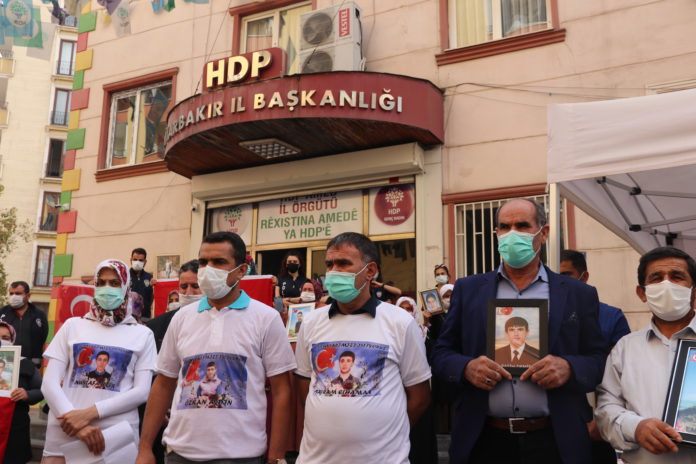 As sit-in protests in southeastern province of Diyarbakir continue with parents demanding the return of children abducted by PKK terrorists, residents of the province support the cause of tearful parents and say their struggle could eradicate Turkey’s terror issue that has claimed thousands of lives in recent decades.

The protests began Sept. 3, 2019, when relatives of those who were abducted started a sit-in outside the office of the Peoples’ Democratic Party (HDP), which Turkey accuses of having links to the PKK and YPG – the Syrian offshoot of the PKK. Families blame the PKK for playing a role in the disappearance of their children.

A total of 167 families have taken part in the protests. And when 19 terrorists laid down their weapons and surrendered to Turkish authorities, it became a source of inspiration and joy, not just for the families, but also for Diyarbakir residents who have suffered from PKK terrorism.

“The people of eastern Turkey, especially Diyarbakir, have always been the target of the PKK terror group because terrorists brainwash underage children for recruitment. New generations cannot find good opportunities and have a proper future unlike their peers in the West,” according to Sehmus Kaba, 39, an engineer living in Diyarbakir.

“The terror group manipulates children at school age, or even force them to join the PKK. The mothers’ protest has been a wake-up-call for all parents living here and inflicted heavy damage on the terrorists’ propaganda,” said Kaba, who noted low-income families were in the crosshairs of the terror group.

PKK activities in the region have slowed regional and provincial development as several companies preferred not to invest in Diyarbakir because of the fear of terrorism, said Kaba, who believes the younger generation would try to leave the region if they had the opportunity.

“I do believe that the sincere sit-in protest of parents is much more effective than any military campaign, that is because bullets kill terrorists but tears of mothers kill the poisonous ideology of the PKK which is based on abuse of poor people here,” he said.

Another resident of Diyarbakir who only wanted to be identified by his initials, T. K., said the terror group reacted to the protests more than it did to Turkish Armed Forces’ (TAF) military operations, proving that the demonstrations have been a nightmare for the PKK.

“When you take a look at the families protesting, you will see that most of them live a modest life and they are uneducated; however, affiliates of the terrorists send their children abroad for education or holiday while enjoying a luxurious life,” he said.

T. K. said the ill-intent of the PKK was clear given the fact that it would forcibly recruit children as young as 10 and cut communication with their parents. “Who in the right mind could send a child to frontlines for a political purpose? Is this justice?,” he asked rhetorically.

“Whenever I hear that parents’ children surrender to security forces, I get happy as if the child was my sibling. Children should go to schools, learn about life, develop themselves and not fight for any hideous goal,” according to the 26-year-old. “We support all these brave families who did not bow down to PKK’s threats.”

He continued: “As a man living in this province whole his life, I can easily say that the so-called cause of the terror group brought nothing but damage to our people. I’m a Kurdish man and can proudly say that our state does not make any discriminations about our identity. We no longer buy the PKK lies.”