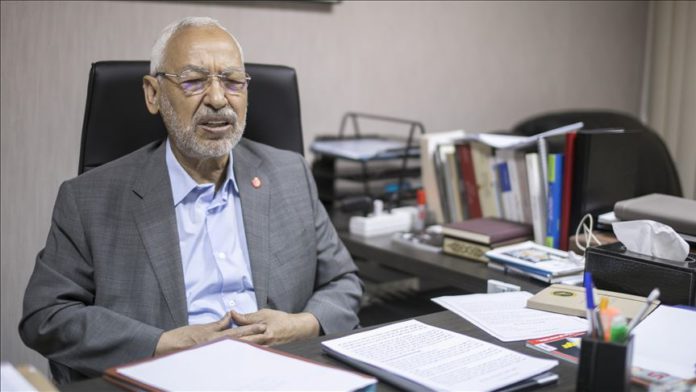 Tunisian Parliament Speaker Rached Ghannouchi has warned that calls for dissolving the assembly are “recipes for chaos”.

In an exclusive interview with Anadolu Agency, Ghannouchi, the head of Ennahda party — largest bloc in the 217-seat parliament — denied any dispute with Tunisian President Kais Saied.

“Demonstration, protest and all other forms of individual and collective expression are manifestations of democracy,” Ghannouchi said.

If demonstrations, he said, turn into “harming the public and private domain, burning, looting and obstructing state institutions and the interests of citizens, then this expresses chaos, not opposition,” he said.

In such case, it is “the state’s duty to confront chaos and protect peaceful opposition,” he asserted.

Ghannouchi described current calls for dissolving the parliament as “calls for chaos”.

He stressed that dissolving the assembly is set within certain constitutional mechanisms and such opposition calls “will remain outside the constitutional context”.

Commenting on the difficulties facing the ruling coalition government, Ghannouchi said Tunisia “is facing unprecedented challenges due to the outbreak of coronavirus”.

He stressed that having solidarity and synergy within the government is key to facing the challenges in the current stage.

“Nobody today can say for sure that he alone can cope with the emerging situation,” he said.

Ghannouchi also denied any dispute between him and the Tunisian president, citing continuous meetings between them and the prime minister.

“There is no indication of incompatibility or conflict of powers,” Ghannouchi said. “On the contrary, recent weeks have proven the level of great coordination and that the policy of consultation exists, and it is even consolidating day by day.”

He stated that the coronavirus pandemic highlighted the state’s readiness to interact with emergencies with cooperation of all sides.

Harmony between the different parliamentary blocs on March 16, Ghannouchi said, manifested national unity and enabled the state to take swift urgent measures to mitigate the spread of coronavirus.

The parliament speaker went on to hail the great efforts of health workers as well who “performed their duties in the best way”.

Commenting on media leaks about powers seeking to undermine the Tunisian revolution and its democratic gains, Ghannouchi said: “Regardless of the conspiracy theory and in line with logic, every revolution has someone who stands against it and works to overthrow it”.

The Arab Spring, which began and spread from Tunisia, is being opposed by many powers that fear freedom and seek to preserve their interests, Ghannouchi said.

He pointed out that “this matter is no longer hidden to anyone. Rather, many countries have publicly declared this”.

“Although we asserted from the beginning that the Tunisian revolution is not for export [as a role model to be applied in other countries], however, this did not prevent them from targeting us,” he said.

He asserted that such powers are against history and the Arab world, which currently experiences profound transformations, will continue the path for change because these transformations “are an expression of the will of the peoples and their desire for freedom and justice”.

Ghannouchi went on to note that a political solution is the safest way to end insecurity and chaos in Libya.

“Libya’s neighbors cannot live in carelessness. If there is a fire at your neighbor, you cannot be neutral; extinguishing the fire is a duty and necessity, so passive neutrality makes no sense,” Ghannouchi said.

He went on to say: “We call for positive neutrality by pushing all rivals to a political and peaceful solution … Our vision is that a political solution in Libya is the safest way to overcome insecurity and chaos.”

As for the refusal of some Tunisian opposition parties to his communication – as speaker of parliament – with the internationally recognized Libyan government headed by Fayez al-Sarraj, Ghannouchi stressed that his communication “did not exceed the Tunisian diplomacy rules”.

He emphasized that Tunisia and its President Kais Saied are in contact with the al-Sarraj government “because it is the representative of sovereignty according to international legitimacy”.

“We have previously met Aguila Saleh, representative [head] of the Tobruk Parliament [in eastern Libya], and this was consistent with positive neutrality”.

Ghannouchi stressed that “what brings us together with Libya is not only interests, even though they are necessary”.

“Values of brotherhood, cooperation, peace and good neighborliness bring us together with Libya; therefore, we work and communicate according to this vision,” he asserted.