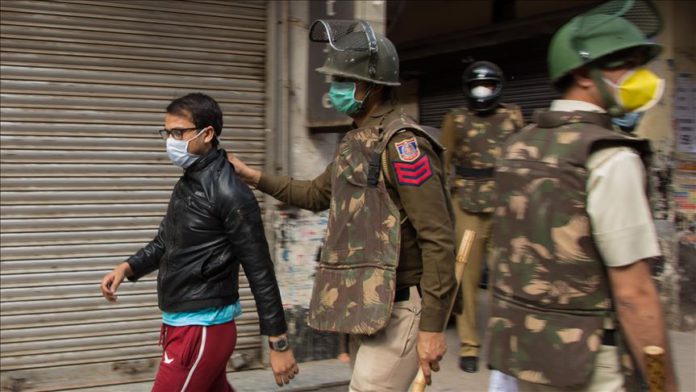 A group of activists in India criticized Delhi police for targeting voices speaking against the controversial citizenship law, claiming “the dissent are being implicated” in the country.

The group that issued a statement Wednesday expressed anguish at the “sheer brazenness” with which the Delhi police has turned the investigation of deadly communal riots in the capital earlier this year into an “inquisition of the anti-CAA protests,” referring to the Citizenship Amendment Act, the legislation passed late 2019 which grants citizenship to Hindus, Sikhs, Jains and Christians from Pakistan, Afghanistan and Bangladesh but blocks naturalization for Muslims.

On Sunday night, Umar Khalid, a former student of Jawaharlal Nehru University in New Delhi, was arrested by Delhi police and booked under the stringent law for preventing unlawful activities.

The group said Umar Khalid was among the young voices “who have risen up in the defense of the constitution, at the service of truth, and are today prisoners of conscience”.

“We all wanted a fair investigation into the Delhi violence, but what the Delhi police has restored to is a sinister plan to brand, target, frame, and arrest all those voices that dared to speak up against unconstitutional and immoral Citizenship Amendment Act (CAA),” said a statement by the group on Wednesday.

In the worst riots in decades, which turned violent on the day when US President Donald Trump started a two-day maiden trip to India in February, over 50 people were killed and hundreds injured. According to official records, police have arrested 1,575 people in 751 cases so far in connection with communal riots which were triggered by the controversial citizenship law.

Blaming the ruling Bhartiya Janata Party (BJP) party for “deploying the police, a plaint media, and all draconian laws at its disposal to unleash a vicious witch hunt, particularly against young minds, the activists said the real culprits “remain free”.

Alleging that “even as all the democratic voices of dissent are being gradually implicated,” the group demanded an immediate end to “outrageous investigation” being conducted with “prejudice and malafide intent”.

“We demand that activists booked under the UAPA [Unlawful Activities Prevention Act] be immediately released, and a judicial enquiry commission be constituted to punish the real culprits and ensure justice for Delhi violence,” the members said.

Meanwhile, the official spokesperson for Delhi police on Wednesday told Anadolu Agency that he has no comments to share on the statement. Last week, Delhi police denied the allegations by several groups that people were being framed in false cases in the Delhi violence investigation.

“Some are taking out few lines out of the charge sheets filed in the courts out of context in order to create a controversy and doubt about the investigation. Their assertion is not true and instead, motivated,” the police said in a statement on Sunday.

“Delhi police is investigating into the role of all such individuals who took part in the riot and were part of the larger conspiracy in organizing violence.”