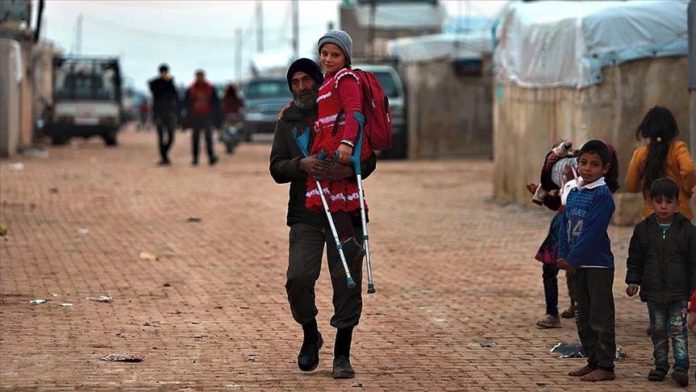 A six-year-old Syrian girl, who lost her left leg three years ago in an airstrike by the Bashar al-Assad regime in Idlib, hopes to get a prosthetic leg and be able to walk again.

Esra Salih and her family left their home in the village of Harbil in the north of Aleppo province in 2015 and took refuge in Idlib after the Daesh/ISIS terrorist organization seized the region, during the civil war in Syria.

The family, who fled from the persecution of the Daesh/ISIS terrorists in Aleppo, was exposed, however, to the Assad regime’s massacre in Idlib.

Esra lost her left leg when she was only 3 years old after regime warplanes struck their house in 2017.

The Syrian girl has been walking with crutches ever since. Her aunt, two cousins, and friends were also killed in the same attack.

The family, who had to leave Idlib shortly after the attack, settled in a tent in the Azaz district under the control of the Syrian opposition.

Esra’s father Habib Salih often carries his daughter to school on his back to relieve her physical suffering caused by the crutches.

“My dream is to get rid of crutches and walk like my friends and run like them. Crutches hurt me badly,” Esra told Anadolu Agency.

Her father said, “I work in a small repair shop and earn less than $1 a day for my family. My only dream is to see my daughter run and play like other children.”

Some 45,000 civilians from Aleppo were settled in refugee camps in opposition-controlled areas in Idlib province, which is adjacent to the Turkish border.