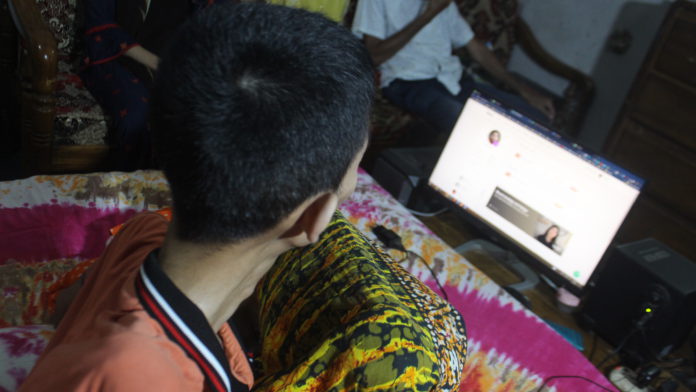 Bangladeshi youth Fahim Ul Karim has been suffering from a rare genetic disease since 2007, when he was nine years old.

Hailing from a low-income family in the remote southwestern district of Magura, Karim traveled to neighboring India with his parents for treatment the same year. But following some preliminary checkups by the hospital’s medical board, he had to return home without completing it due to a lack of money.

Time passed and his condition was deteriorating day by day. At one stage in 2012, his entire body became inactive except two fingers of his right hand.

Despite his grave condition, Karim did not lose hope and remained optimistic about supporting for his family and working for the welfare of his country.

At this point of his life, Stephen Hawking, a world-renowned scientist and the author of “A Brief History of Time,” was a great source of inspiration for him.

“Hawking, who was completely paralyzed with a rare disease [amyotrophic lateral sclerosis, a motor neuron disease], and world-renowned speaker Nick Vujicic, who was born without arms and legs, were my inspiration for struggle in any situation in life,” Karim told Anadolu Agency.

“I believe that Hawking and Vujicic, despite their physical disabilities, achieved world records in their respective fields and so I will also be able to do something great like them.”

In 2016, Karim’s parents took out a loan of 45,000 Bangladeshi taka [$536] from a bank and bought him a laptop and subscribed to a monthly internet package.

It took Karim only four months to teach himself Photoshop skills from a DVD and online, and in February 2017, he managed to land his first work order in print design from a foreign buyer.

“To date, I have worked with buyers from approximately 30 countries, and I mainly work on print design,” he said, adding most of his buyers are from Western countries.

He said that on average, his current monthly income is $300, and it was more before the spread of the novel coronavirus in December last year.

“My highest monthly income was $800 before the pandemic,” he added.

Karim is not only doing outsourcing for himself but is also currently teaching 50 youths across the country about outsourcing and print design.

“I along with some other freelancers am doing social media campaigning for millions of youths in my country so that they can learn and generate their own income sources,” he said.

Karim is now the only earning member of his family, which includes his parents and younger sister.

His father, Mohammad Rezaul Karim, had to leave his job at a private company in 2018 to attend to his sick son.

Since then, Fahim Ul Karim has been working days and nights, and within two years, he has been able to buy property near Magura city, where he also built a small house.

His younger sister, Faria, is a secondary level student at a local school. Karim is covering all her education costs and dreaming of a brighter future for her.

He also dreams of a Bangladesh where everyone has a job.

According to the 2020 labor force survey of the Bangladesh Bureau of Statistics (BBS), the country has 2.6 million unemployed.

“It seems to me very odd that in this era of globalization, so many people of our country are unemployed. I wish to glorify Bangladesh in the world as an unemployed-free country,” he added.

Expressing his gratitude to Allah, Karim added that “almighty Allah has fulfilled his wish” to enable him to earn money for his family.

“Now I hope that Allah will also make my dream for a prosperous Bangladesh come true, and I am determined to work in this regard throughout my whole life.”

Karim’s mother, Hazera Khatun, said her son is not even able to sit on a chair, but still he is doing hard work with his two fingers.

“People from different parts of the country come to see my son, and they appreciate him. But as a mother, I can’t bear such hardship of my son,” she said.

“If we are able to manage someday [to save up] approximately one million [Bangladeshi] taka [$11,905], we will go abroad to start complete treatment of my son.”

Echoing her sentiment, Karim’s father said: “If the government or any other welfare agency or person comes forward to arrange treatment abroad for my son, he will be capable of contributing more to the country.”

“Insha’Allah [If God wills], whatever time it takes; I will obtain money to treat my son. But it’s very painful to tolerate this condition of my son for long.

“I still remember those happy days when I took my sweet son to school and people appreciated his beauty and talent,” he added. 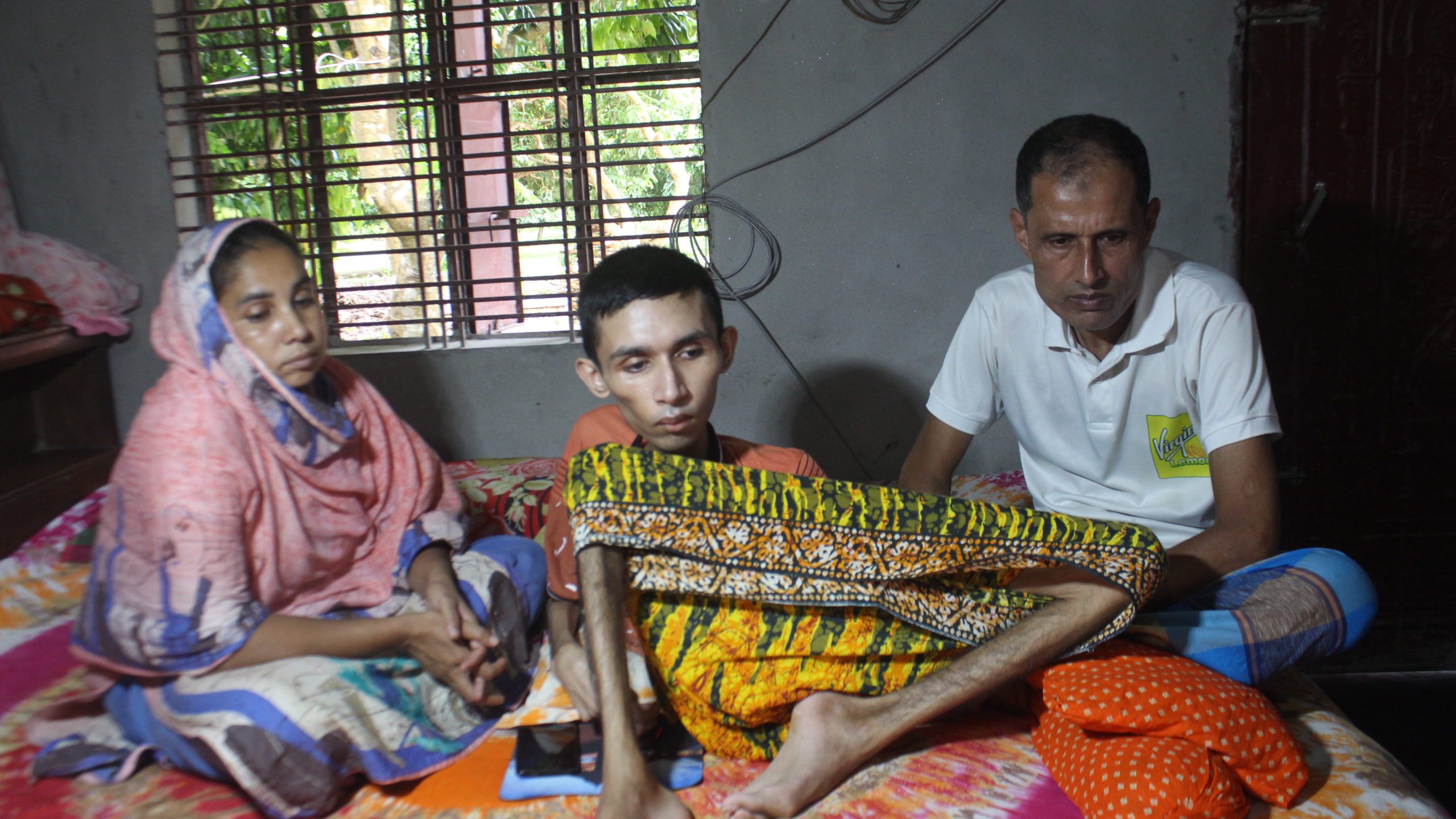