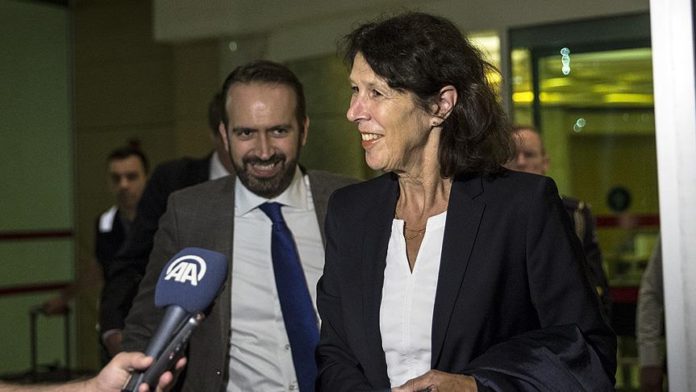 The diplomatic world is no longer male-dominated and is also very much a woman’s world, said the Netherlands’ Ambassador to Turkey, celebrating International Women’s Day.

“I think by now, you can’t say that it’s a man’s world anymore. It’s also very much a woman’s world, and they are doing fine,” Marjanne de Kwaasteniet told Anadolu Agency.

“It became kind of normal to give this position to women and things developed in a positive way. As I say, we are not yet there. We have not yet fully broken the glass ceiling,” she said.

In the Dutch Foreign Ministry, for example, there are a lot of women also in the higher ranks, while in Finland’s diplomatic service, the majority are women, said de Kwaasteniet.

“In the Turkish Foreign Ministry, there are also lots and lots of women in high positions. The US had four or five female ambassadors to the United Nations. We need more women as foreign ministers,” she added.

Aiming for the sky

Advising women to ignore those discouraging them, she said: “You’re good at it. Otherwise, you wouldn’t be there. So just continue to do your best. And then you will prove yourself.”

“I think the most important thing is to do what you want or like to do. Reach high and don’t listen to what people say around you,” she said.

“Women are smart. And I think they can do anything they like to do. It’s just a matter of being persistent, keeping courage. Don’t listen too much to what other people say about you, but just be focused, and focus on the substance of your job.”

De Kwaasteniet said that about 20 years ago, she was appointed as an ambassador to Jordan and was the only female ambassador among 80 ambassadors, but she wanted to do her best and did it.

Becoming a diplomat as a woman

Speaking on how she decided to become a diplomat, de Kwaasteniet said she started to become interested in international politics and the economy while in high school.

“During my studies, I spent some time in Kenya to do field research. I also spent time in Brussels with the European Commission as a training,” she added.

Highlighting that she really does not know where her interest in international issues came from, de Kwaasteniet said that interest made it logical also to pursue an international career.

After completing her Ph.D., she applied to the Dutch Ministry of Foreign Affairs at the end of her 20s, she said, adding “it was really the logical thing to do.”

Stressing that most of her colleagues were men during this period, de Kwaasteniet said: “In the mid-90s, I was assigned to the security and defense department. There were 25 men and me. So it was just one woman in a crew of 26. And I think it was not normal. Other sections of the ministry had more women. Particularly in security and defense, it was very male-dominated.”

“As a European country, women’s rights are an important part of our human rights policy and in particular, the field of combating domestic violence and sexual violence,” de Kwaasteniet said.

They try to work a lot on that with various countries, including Turkey, she said, adding they provided legal, social, and psychological assistance to women subjected to sexual violence at a counseling center in Istanbul.

“We also work in Kas, the other side of the country, where we do an awareness-raising project with men in order to try to prevent sexual violence, honor killings, early marriage of girls.

“For example, we have made the so-called purple telephone book. It is a database of women experts. Particularly women working in the media, so they can easily find each other and network with each other,” she said.

She also underscored the importance of fighting against domestic violence.

“Domestic violence is a very important part of our work. I think especially now, in the pandemic, I should say, I think we’ve seen that everywhere. And Turkey is no exception.”

There is no clear solution for this, but transparency is important, de Kwaasteniet said.

KADES allows immediate reaction in case of violence against women.

“I want to point out that I think the Istanbul convention is a very important document. Turkey was the first one to ratify this convention. And it has served very well since 2012 to boost all the policies to protect women and to support them and to develop instruments to realize all aims of that convention and to give women a safer place in this country. I know it has been under discussion, but I think it’s very important that Turkey does not turn its back on it,” she added.