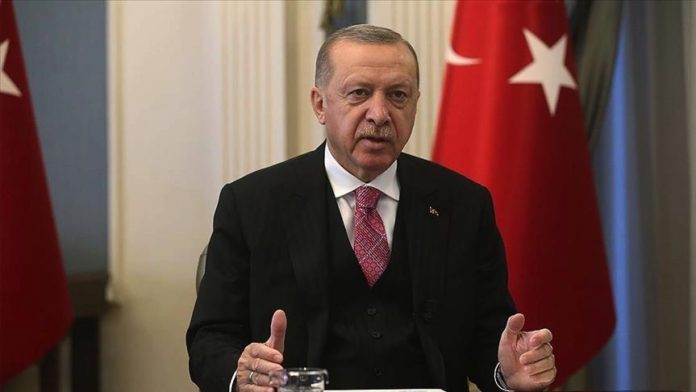 Turkey’s president on Tuesday warned about unchecked digitalization during the opening ceremony of the fourth TRT World Forum, being held virtually this year due to coronavirus pandemic.

“With digitalization expanding the field of freedom, it should not lead to new inequalities, injustices, and marginalization,” President Recep Tayyip Erdogan said in his opening remarks.

This year’s TRT World Forum, held by state broadcaster TRT’s English-language service, is being held under the theme “Shifting Dynamics: The International Order in a Post-Pandemic World.”

Noting that the two-day online forum will feature sessions on subjects from digitalization to technology, trade to Syria, and Yemen to clashes in Nagorno-Karabakh (Upper Karabakh), Erdogan wished the event all success.

“If seen as area with no control, open to arbitrariness and outside of the law, digitalization will us directly to fascism,” Erdogan warned

On a recently proposed French security law, under fire for violating press freedom and hindering efforts to stop police brutality, Erdogan criticized the proposal, saying: “International media kept silent in the face of France’s blockade on the media.”

France’s ruling party on Monday withdrew the proposed law, saying the controversial sections would be reworked.

“It is very embarrassing for media outlets to carry the banner of Islamophobia and xenophobia,” Erdogan said, likely referring to much-criticized cartoons of the Prophet Muhammad published by a French magazine.

“If discourteous attitudes shown under the cover of press freedom are not stopped, both Europe and all humanity will suffer,” he added.