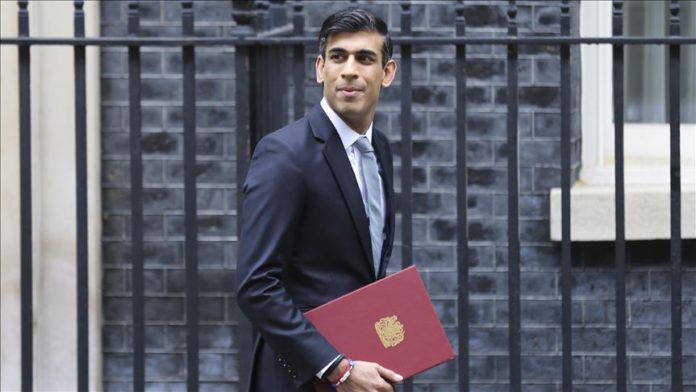 As British health authorities announced on Thursday that a further 85 people died of coronavirus across the UK over the past 24 hours, bringing the total to 44,602, the chancellor of the exchequer warned “there are difficult times ahead.”

“We’ve moved through the acute phase of the crisis where large swathes of the economy were closed. We’re now fortunately able to safely reopen parts of our economy, that’s the most important thing that we can do to get things going,” said Rishi Sunak.

“But unless activity returns to normal, those jobs are at risk of going, which is why we acted in the way that we did,” he said, referring to stimulus measures announced Wednesday.

Sunak said he was “anxious” about the economy, and that the country is “entering into a very significant recession.”

He said the government acted to protect as many businesses and jobs as possible “so that when we emerged from the other side of this crisis we could bounce back as strongly as possible.”

“Now that we’re there we want to try and make that recovery as strong as it could be, which is why having people out and about, back in restaurants, moving house, renovating homes, installing energy efficiency measures in homes,” he said, citing the stimulus measures.

“I’ve been very clear that we are not going to be able to protect every single job and it would be wrong of me to pretend otherwise,” he said.

“There are going to be difficult times ahead and … there are forecasts for people predicting significant levels of unemployment,” he said. “That weighs very heavily on me.”

Paul Johnson, director of the Institute of Fiscal Studies (IFS) think tank, said there would be a “reckoning” when the time comes to repair the nation’s public finances. He said the recession that the UK is facing was the “deepest in our history.”

IFS Deputy Director Carl Emmerson said that it would take “decades” to bring UK debt back down to pre-pandemic levels.

“Once we’re through the crisis phase, once the economy has established its new normal, we are probably going to find that the economy is not as big as what it would have been had the coronavirus never hit,” he said.

“If that’s the case, and it’s very likely to be the case, revenues will still be depressed, and if we want to try then to bring the deficit back to where it would have been absent the crisis we will need to do some spending cuts, or given a decade of austerity, perhaps more likely some tax rises,” he said.

This was a task “for not just the current chancellor, but also many of his successors,” Emmerson said.

“It’s going to take decades before we manage that debt down to the levels we were used to pre this crisis,” he said.

Since originating in China last December, the pandemic has claimed nearly 550,000 lives in 188 countries and regions.

More than 12 million cases have been reported worldwide, including more than 6.5 million recoveries so far, according to figures compiled by the US’ Johns Hopkins University.