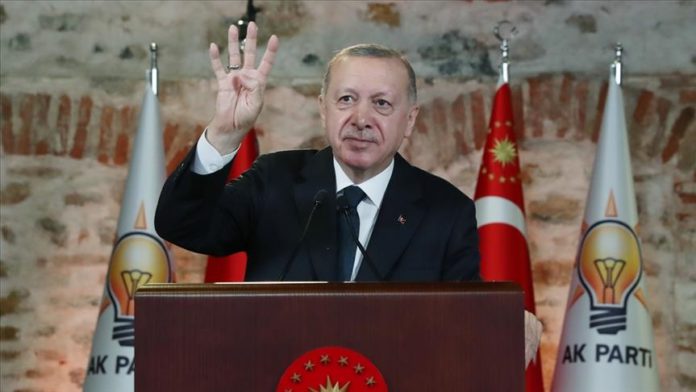 The Turkish president said Friday that family institution is key for a country’s future and the Western countries’ basis is shaken due to lack of such institution.

“Turkey owes its resistance against attacks and its confidence in future to the robustness of the family structure,” Recep Tayyip Erdogan told his ruling Justice and Development (AK) Party’s provincial congresses of women’s branches via video link.

Noting that family is a sacred structure for Turkey, Erdogan said the Western world is shaken from its basis because of destroying the institution of family.

“The devaluation of the family is followed by many social problems, from alcohol and drug addiction to nihilism,” Erdogan warned.

He said the government shows its support to each member with its services for women, children, youth, the elderly, and the disabled.

“Women’s involvement in the labor force reached over 31%,” he said, adding that 60% of teachers and 40% of public workers are women.

Erdogan said women are becoming more visible and effective in politics as well.

Touching recent demonstrations at Istanbul-based Bogazici University, Erdogan said a group of young people was involved in such a game through external provocations.

“Nobody has the right to provoke these houses of knowledge and terrorize these places, and we will not allow this,” he stressed.

The demonstrations intensified when two Bogazici University students were remanded in custody for displaying a painting allegedly offensive to Islamic values on university grounds.

According to Interior Ministry spokesman Ismail Catakli on Thursday, a total of 528 people had been detained across 38 provinces since Jan. 4 during the protests.

Two of them were remanded in custody while 390 were released, he said, adding that 108 of those arrested were later released on condition of judicial control.

On Tuesday, Interior Minister Suleyman Soylu said 79 of those arrested were members of terrorist organizations, including the leftist DHKP/C and TKP-ML.​​​​​​​