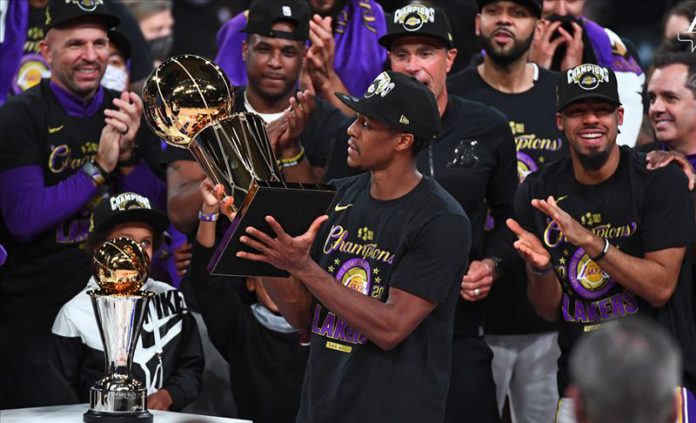 The world witnessed one of the most extraordinary NBA seasons in the history of the league which was concluded with the bubble format in Orlando, Florida due to the coronavirus while the Los Angeles Lakers ended their 10-year title drought after beating the Miami Heat in the finals.

Having won their 17th championship in the NBA, the Lakers are now tied with their rivals the Boston Celtics for the most NBA titles in history and also became the NBA’s most storied and glamorous franchise with more titles in the last 40 years (11) than any other team.

The loss of Kobe Bryant in a helicopter crash in January may have made this championship more memorable than any of the other 16 titles for the Lakers.

Sports journalist Howard Beck from the Bleacher Report said that every season which doesn’t end with a championship is considered a failure for the Lakers, so this title was huge for the franchise.

“The Lakers had not won a title since 2010 and had not even made the playoffs since 2013. Of course, that’s not very long for the average franchise. But the Lakers have been spoiled by their success. They’ve also been through a very tumultuous time – from the death of longtime owner Jerry Buss in 2013 to the power struggle among the Buss children to the firing of longtime General Manager Mitch Kupchak and the retirement of Kobe Bryant in 2016,” Beck told Anadolu Agency in an interview.

Expectations have always been huge in the Lakers as the franchise hosted many of the greatest talents, including Hall of Famers.

But fans were not happy in recent years since the franchise failed to meet expectations and replace Kobe with another star player until they acquired LeBron in 2018 and Anthony Davis the following year.

“The Lakers repeatedly failed to lure another superstar to join Kobe in his later years or to follow him as the face of the franchise. For a while, it seemed the Lakers might be in decline. Even signing LeBron James in 2018 came with no assurances. He was 33 at the time and anchoring a young team with no other stars. It took another year to land Anthony Davis and put the Lakers on the path to contention.

“Now the Lakers have reclaimed their place as the league’s preeminent franchise. It has added symbolic importance because of Kobe’s death earlier this year,” Beck added.

This title was also remarkable for LeBron, who won his fourth title and fourth Finals MVP award to fuel the “Greatest of All Time” (G.O.A.T.) conversation between him and Michael Jordan.

But LeBron still believes that he doesn’t get the respect he deserves.

“I want my damn respect,“ he said after lifting the title.

Beck said he was a little “puzzled” by LeBron’s remark.

“He’s won four regular-season MVPs and four Finals MVPs [including this one, unanimously], with 16 All-Star appearances and 16 All-NBA appearances. He’s universally regarded as one of the two or three best players in the history of basketball. So, I don’t think he’s lacking in respect. But there are still a few vocal critics who want to denigrate his career and his achievements. So perhaps he’s simply firing back at that vocal minority.”

‘Heat will be a contender again’

The season’s other successful team, the Eastern Conference winner Miami Heat, had a great performance and moved to finals beyond the pre-season expectations. But some players should remain to improve for sustainable achievements in the upcoming seasons.

Beck believes that the Heat will be a contender again next season, although the East has become incredibly competitive.

“I think the Bucks, Raptors, Nets and Sixers will all be contenders for the Eastern Conference title. For Miami, the key is internal growth. Aside from Jimmy Butler, their best players are all still young and evolving – Bam Adebayo, Tyler Herro, Duncan Robinson, Kendrick Nunn. If that group continues to improve, the Heat will be a contender for years to come.”

Heat should re-sign Goran Dragic, if they can retain cap flexibility in 2021, according to Beck.

“Miami could have max cap room next year and will be one of the favorites to sign Giannis Antetokounmpo if he leaves Milwaukee.”