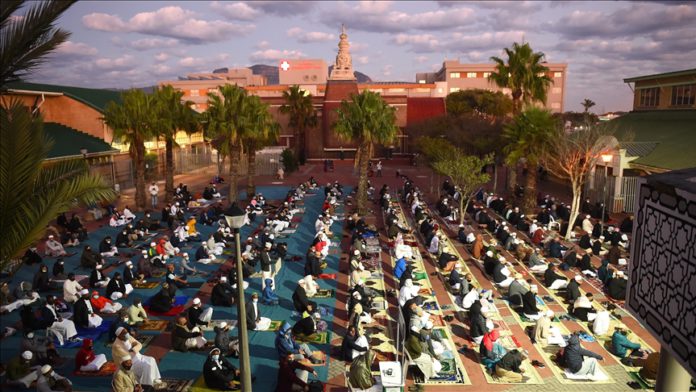 South Africa has no place for religious intolerance or discrimination despite growing Islamophobia and hate across the globe, activists told Anadolu Agency ahead of World Religious Freedom Day.

“The uniqueness of South Africa post-1994 (after the end of the apartheid era) is the fact that racism and bigotry are not tolerated,” Iqbal Jassat, an executive member of the Johannesburg-based Media Review Network think tank, told Anadolu Agency.

Jassat said anti-Muslim hate was inherent during the apartheid era but after the country attained democracy in 1994, that conduct is not allowed or tolerated.

“A number of factors have made a positive contribution to South Africa’s unique position, which regrettably does not exist in Europe, America and elsewhere,” he said.

Jassat said the Constitution guarantees freedom of religion, a bill of rights plus a range of organizations have been set up to ensure human dignity for all.

He said Muslims, like other religions, participated in the struggle against apartheid, going into the trenches to fight the oppressors. Muslims were also detained for their role in fighting apartheid and others fled into exile.

“Entrenched within the liberation movement, many Muslims played a pivotal role in the freedom struggle and in shaping the future,” said Jassat. “Today an active and vibrant collective of Muslim civil society organizations are involved in a whole range of activities ranging from humanitarian to human rights.”

It is rare to find in South Africans fighting about religious differences, unlike in the West where Islamophobia manifests in individual attitudes and behaviors, and the policies and practices of organizations and institutions.

The president of the General Industries Workers Union of South Africa, Mametlwe Sebei, told Anadolu Agency that religions in South Africa faced oppression during the apartheid era and that caused them to unite.

“The struggle against apartheid cemented the unity of a culture of tolerance which is part of the Constitution and part of the post-apartheid consciousness, especially across the working class and the poor,” he said.

Sebei said despite missionaries who came to Africa as “advanced guards of colonial forces,” converting Black Africans into Christians, the population still faced oppression. He said all regions faced oppression, which is reflected in the current level of tolerance and co-existence.

“Very often between 1950 and 1970 all the denominations held fast against the excesses committed at the height of apartheid,” he said, adding that he believes it is responsible for the current religious tolerance.

But Jazbhay acknowledged that Islamophobia exists on a low level and was imposed on South Africa by foreign Indian nationalist groups that have found a foothold in the country.

“It’s happening but not in the majority. Ever since the Bharatiya Janata Party (BJP), India’s ruling party, gained power, there has been an export of Islamophobia all over the world where Muslims and Hindus subsisted and maintained an entente cordiale as minorities building on finding common purpose,” he said.

President Cyril Ramaphosa told parliament in November 2020 that the country has no place for religious intolerance, saying the Constitution is clear that no person may be discriminated against based on religion, conscience, belief, culture or language.

Ramaphosa’s response followed a question on allegations that there is a rise in “Islamic extremists” in parts of the country.