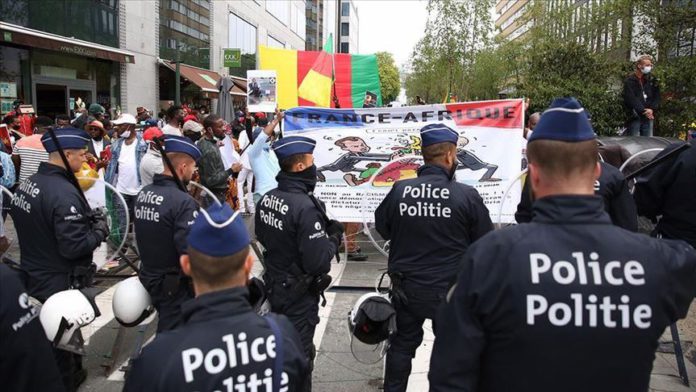 The protesters gathered in front of the building of the European Council, where EU leaders were discussing the bloc’s COVID-19 recovery fund and the next long-term budget.

Demonstrators carrying Cameroonian flags, as well as banners condemning French colonialism and recent comments by Macron on the human rights situation in the country.

Referring to Cameroon’s colonial past, they chanted slogans calling the French “assassins” and “criminals.”

Belgian police intervened with gas canisters after some of the protesters tried to cross over barriers surrounding the building. Several were arrested.

In February, the French president called human rights violations in Cameroon “intolerable” when an activist asked his opinion about recent developments of a separatist insurgency in the Central African country during a public event.

Macron was referring to a raid in which at least 22 villagers were killed by a militia and promised to call the country’s president Paul Biya.

His remarks sparked outrage in Cameroon, which only gained its independence from France in 1960.

Several thousand Cameroonians are estimated to have lost their lives during the independence struggle with French forces.

Last month, tens of thousands took the streets all over Europe to show their solidarity with the Black Live Matter protests in the US and challenged European countries’ colonialist past.

The protests were ignited by the death of George Floyd, an unarmed African-American man who died on May 25 in the US city of Minneapolis, Minnesota, after an arrest during which a White police officer knelt on his neck for nearly nine minutes.