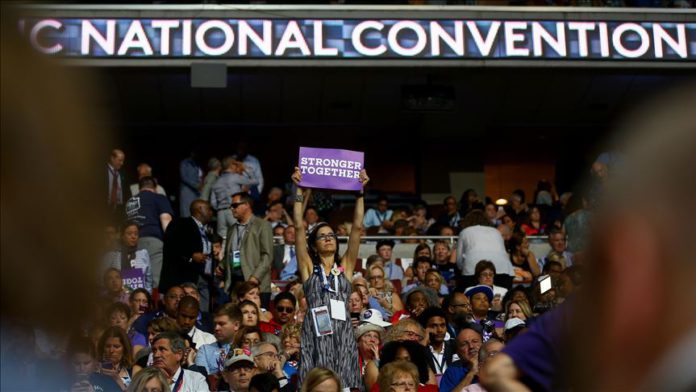 Split between a growing progressive wing and an establishment base, Democrats on Monday urged all factions to unite around presumptive nominee Joe Biden to ensure that US President Donald Trump does not secure a second term in office.

Vermont Senator Bernie Sanders, who rallied a progressive movement around him in his bid for the party’s nomination, and who for months led the race only to lose the contest to Biden, urged his supporters to recognize the gravity of the “unprecedented moment” before them and back his former rival.

Sanders told his supporters during the first night of an historic virtual convention that should Trump win re-election, “all the progress we have made will be in jeopardy.”

“At its most basic, this election is about preserving our democracy. During this president’s term, the unthinkable has become normal. He has tried to prevent people from voting, undermined the US Postal Service, deployed the military and federal agents against peaceful protesters, threatened to delay the election and suggested that he will not leave office if he loses,” he said.

“This is not normal, and we must never treat it like it is. Under this administration, authoritarianism has taken root in our country,” he added.

The progressive standard-bearer pledged to work alongside individuals from across the political spectrum, including moderates and conservatives, “to preserve this nation from a threat that so many of our heroes fought and died to defeat.”

Democrats are holding their convention with a mixture of pre-recorded video messages and live hosting as the US remains hard-hit by the coronavirus pandemic, which has claimed the lives of over 170,000 people.

Keynoting the night’s speakers, former first lady Michelle Obama laid into Trump, saying he “is the wrong president for our country” and imploring voters to turn out in support of Biden even if he is not their first choice.

Trump, she said, “has had more than enough time to prove that he can do the job, but he is clearly in over his head. He cannot meet this moment. He simply cannot be who we need him to be for us. It is what it is.”

In an effort to win over Republicans dissatisfied by Trump’s first four years, Democrats invited a handful of Republicans including John Kasich, the Republican former governor of Ohio, to address the convention in an exceedingly rare display of bipartisan opposition to the president.

Kasich, who ran for the Republican nomination against Trump in 2016, said the nation is “at a crossroads” ahead of the Nov. 3 polls, with the stakes at play “greater than any in modern times.”

“Many of us have been deeply concerned about the current path we’ve been following for the past four years,” he said, appealing to Republicans to cross party lines come Election Day.

“Continuing to follow that path will have terrible consequences for America’s soul, because we are being taken down the wrong road by a president who has pitted one against the other. He’s unlike all our best leaders before him who worked to unite us, to bridge our differences and lead us to a united America,” he said.

In the days ahead, a number of high-profile Democrats are slated to address their convention, including Biden’s vice presidential pick Kamala Harris, former President Bill Clinton and progressive congresswoman Alexandria Ocasio-Cortez.

Biden will accept the party’s nomination on the convention’s fourth and final night Thursday.