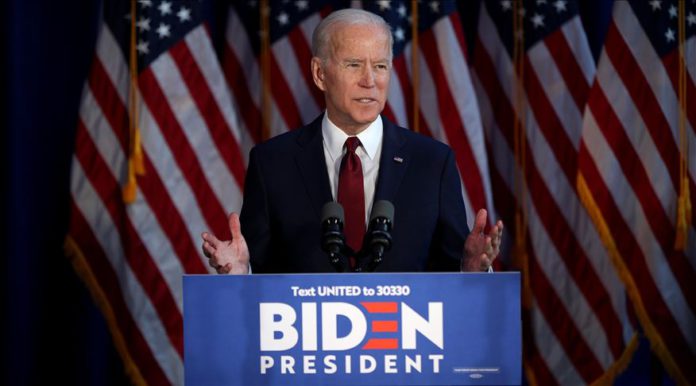 After a virtual roll call vote which contrasted with the animated ritual of delegates shouting their state’s numbers in a ballroom, Joe Biden was officially selected to be the Democratic nominee for US president on the second night of the Democratic Convention.

“Thank you all. It means the world to me and my family, and I’ll see you on Thursday,” Biden said from the Delaware school where his wife, Jill, delivered her speech Tuesday night.

In her convention speech, Jill Biden gave a testament to her husband’s character, bringing a personal touch to the night. She praised Biden’s courage to continue working after the loss of their son Beau.

“Four days after Beau’s funeral, I watched Joe shave and put on his suit. I saw him steel himself in the mirror, take a breath, put his shoulders back and walk out into a world empty of our son. He went back to work. That’s just who he is.”

The second day of the convention began with a range of high-profile Democrats including former President Bill Clinton and Representative Alexandria Ocasio-Cortez, who spoke on Biden’s behalf and slammed President Donald Trump on his handling of the coronavirus outbreak, racial injustice and his denial of climate change.

“How did Donald Trump respond? At first he said the virus was under control and would soon disappear. When it didn’t, he was on TV every day bragging on what a great job he was doing, while scientists waited to give us vital information. When he didn’t like the expert advice he was given, he ignored it,” Clinton said.

“Only when COVID exploded in even more states did he encourage people to wear masks. By then, many more were dying. When asked about the surge in deaths, he shrugged and said, ‘It is what it is.’ But did it have to be this way? No. COVID hit us much harder than it had to.”

Clinton then made a striking statement that the United States is the only major industrial economy to see its unemployment rate triple since the coronavirus pandemic began.

One of the themes seen during this convention is Republicans who have spoken about the reasons they believe the country should back Biden, including former Secretary of State Colin Powell.

“Joe Biden will be a president we will all be proud to salute,” he said during a video message. “With Joe Biden in the White House, you will never doubt that he will stand with our friends and stand up to our adversaries—never the other way around.”

Sally Yates, former acting Attorney General in the Trump administration, who was fired after refusing to enforce Trump’s ban on travel from a group of majority-Muslim nations, also blasted Trump.

“That was the start of his relentless attack on democratic institutions and countless dedicated public servants,” she said.

Biden is set to accept the nomination in a speech on Thursday.