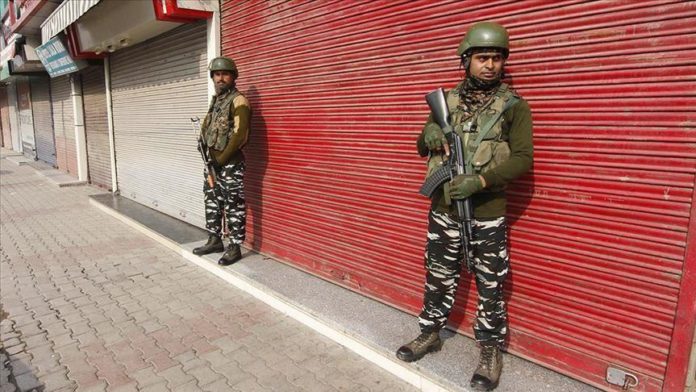 The Kashmiri diaspora around the world has demanded the demilitarization of Jammu and Kashmir to pave way for a plebiscite in the disputed Himalayan region.

“[The Indian government] has unleashed a well-designed imperialist plan that seeks to forever change the political nature of the Kashmir dispute through demographic changes, political maneuverings, and administrative machinations,” read the statement released by the World Kashmir Awareness Forum from the US.

Before scrapping the legislation that protected the region’s autonomous status on Aug. 5 last year, India deployed tens of thousands of soldiers in Jammu and Kashmir to quash any backlash over the controversial move.

Phone and internet connections were snapped and more than 7,300 leaders and activists were imprisoned.

“Disarm and withdraw all Indian military and paramilitary personnel from the occupied territories so that all the people in Jammu & Kashmir can exercise their unfettered right of self-determination through a free and fair referendum, as agreed to by both the Governments of India and Pakistan as well as the United Nations Security Council as early as 1948,” the Kashmiri diaspora groups said.

“The events of Aug. 5, 2019 are consistent with the ruthless occupation and suppression the people of Kashmir have suffered under the unpopular Indian rule.”

They said India’s “brutal occupation has led to 150,000 civilian deaths, more than 8000 individuals missing or disappeared, and thousands of Kashmiri women raped.”

“This does not even begin to account for the tens of thousands tortured, maimed, and permanently injured men, women and children by the Indian security forces during their 72-year reign of terror,” read the statement.

The diaspora groups expressed their support for Kashmiris’ “unyielding struggle to resist occupation and achieve their right to self-determination.”

“Despite this persistent and pernicious tyranny, the people of Kashmir never have nor ever will give up their right to be free,” the statement said.

“We stand with them in their struggle to stop the Indian government from dehumanizing them and completing their settler-colonial project to remove them culturally, politically, and ethnically from the face of the earth.”

It asked India to “halt and rescind all laws, including the domicile laws that have been instituted to speed the demographic changes and promote the ethnic, cultural, and political cleansing of the people of Jammu and Kashmir.”

China ‘ready’ to include ASEAN in $2B COVID-19 aid

Mexico marks its most violent month since last June