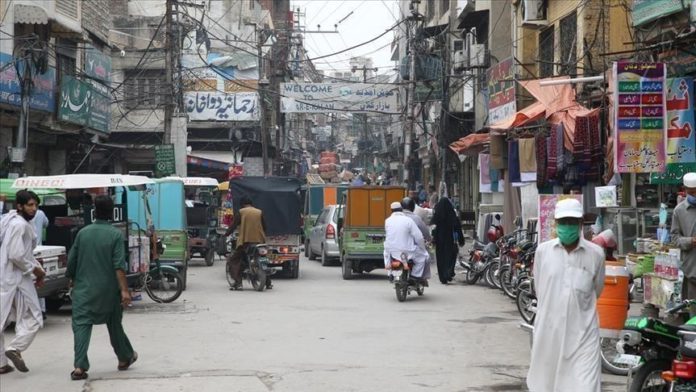 Concerns of a fourth wave of coronavirus in Pakistan have grown amid the emergence of the Delta variant, a strain of the virus first identified in neighboring India.

“The Delta variant is spreading across the country,” a senior official in the National Command and Operation Center (NCOC), Pakistan’s anti-virus task force, told Anadolu Agency on condition of anonymity.

This spread comes despite the positivity ratio, which shot up to 9% in May, recently hovering between 2% and 4%.

“After a downslide, infections are on the rise again. We fear that the Delta variant could strike Pakistan,” he said in a televised address.

“I appeal to the nation to wear masks and take protective measures.”

Earlier, Asad Umar, who heads the nation’s anti-virus strategy, said he had reviewed artificial intelligence models and that in the absence of strong enforcement of health guidelines such as wearing masks and maintaining social distancing, a “fourth wave could emerge in Pakistan in July.”

Due to the reluctance of some to get COVID shots, the official said, authorities have banned the entry of the unvaccinated to tourist spots, hotels, movie theaters, and other picnic spots during next week’s Muslim holiday of Eid al-Adha, or Feast of the Sacrifice.

“They are also not allowed to enter makeshift cattle markets,” he added, referring to a key venue for the holiday, in which animals are sacrificed and the meat shared with the poor, in remembrance of the Prophet Abraham’s willingness to sacrifice his son.

He added: “We are also prohibiting domestic air travel from Aug. 1 for those who are not getting jabbed.”

Provincial governments in the past warned that people who refuse to get immunized could have their cellphones blocked or salaries withheld.

There are, however, doubts the orders will be implemented due to poor enforcement mechanisms. Last week, Umar lamented that there was a “complete disregard” of the vaccination requirement for those attending indoor weddings and entering indoor restaurants and gyms.

“If the owners of these facilities do not show responsibility & ensure compliance, there will be no choice but to shut them down,” he tweeted.

Pakistan has expedited its inoculation drive in the past weeks, and anyone 18 or over is eligible for vaccination. Over 20 million vaccine doses have been administered to date, with a record over 0.5 million shots in the last 24 hours.

But only a little more than 4 million people are fully vaccinated. Pakistan has a population of over 200 million.