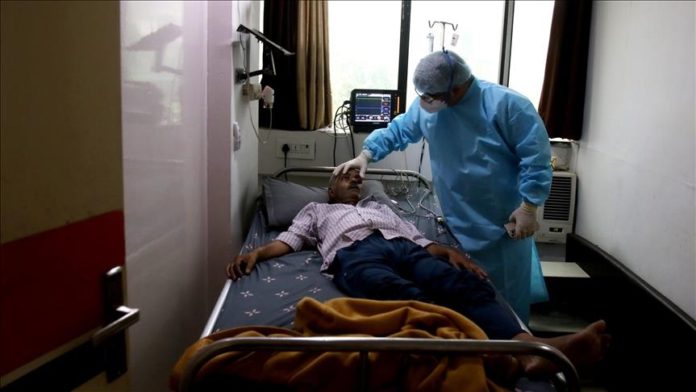 As India observes National Doctors’ Day on Thursday, health professionals recall that few incidents during their battle against the second deadly wave of COVID-19 will remain a splendid gain for posterity.

In one such incident, at the Sevana Hospital and Research Center (SHRC) located in Palakkad district in the southern state of Kerala, a Hindu female practitioner Dr. Rekha Krishnan recited Islamic prayer to a sinking Muslim corona patient.

The Muslim woman was on the ventilator for two weeks and her relatives were not allowed to visit her in the Intensive Care Unit (ICU).

Speaking to Anadolu Agency, Dr. Krishnan recalled that on May 17, the lady patient had started sinking and there was no hope to revive her.

“As I reached the patient, I felt that she was finding it difficult to say goodbye to the world. Since she was a Muslim, I slowly read the Kalima (Islamic prayer) in her ear. As if she was waiting for this. I saw her taking a deep breath and then she passed away peacefully,” said the doctor.

She said that over the 17 days of her admission to the hospital, she had developed a kind of affinity with the patient’s family.

“I could feel the helplessness in them as I was the only point of contact between them,” said Dr. Krishnan.

She said when the patient took her last breath, she stood there as her daughter and “I just followed my heart. The family, who came to know later about my gesture through another doctor were overwhelmed.”

Born and brought up in Dubai, Dr. Krishna said she was exposed to Muslim traditions and rituals.

She said, unlike other patients, Covid-19 patients feel isolated as nobody is allowed to meet or interact with them.

The second wave of COVID-19 that swept the country over the past few months has been the most difficult period for doctors as well.

According to the Indian Medical Association (IMA), a body of medical practitioners, so far 776 doctors have lost their lives since the outbreak of the second wave.

The doctors and nurses in many cities recall that the pandemic has pushed them into mental exhaustion. Many of them worked 24-28 hours at a stretch, due to the collapse of the health system.

The northern state of Bihar witnessed the maximum number of 115 deaths of doctors, followed by the national capital Delhi with 109. The IMA said that eight pregnant female doctors also lost their lives during the wave.

Last year, coinciding with the outbreak of the first wave of COVID-19 Prime Minister Narendra Modi led people across India to clap, rang bells, and blew conch shells on March 22 evening to thank health workers at the forefront of combating the virus.

Dr. Jayesh Lele, secretary-general of the IMA, however, complained about the absence of any government help to families of deceased doctors.

He said in absence of the help, the IMA members have collected funds and are disbursing 10 lakh rupees ($14,000) to each family of deceased doctors.

“We cannot give more than that but we thought some help should be given to them and so we are collecting from our members and donors,” he said.

Requesting anonymity, a doctor in New Delhi said he was horrified to see patients scumbling for want of oxygen.

In the eastern state of West Bengal, Dr. Mousimi Das recalls that she had to treat her mother in her own Kolkata hospital along with other patients, who were scumbling to the virus.

Doctors worked beyond call of duty

“The death toll would have been much less and we could have saved many more lives had the authorities strengthened our medical infrastructure adequately after the first wave of Covid-19 was over,” said another doctor from India’s largest province of Uttar Pradesh. He also did not wish to be identified as he is not authorized to speak to the media.

Despite their yeoman service, doctors were sometimes blamed and even punished by authorities at some places for negligence in duty. In Uttar Pradesh, officials held doctors responsible for the deteriorating pandemic situation after which 16 doctors resigned en masse.

Dr. Krishnan said doctors in India do tend to go beyond the call of their duty.

“We are taught that way, the doctors here fought selflessly, many lost their lives or their family members. With the country’s huge population and the low ratio of doctors serving them, each one of us worked round the clock to save lives. But I am sure none have regrets, if the need arises we will plunge into action again selflessly,” she said.

WHO calls for greater COVID-19 vigilance in Africa