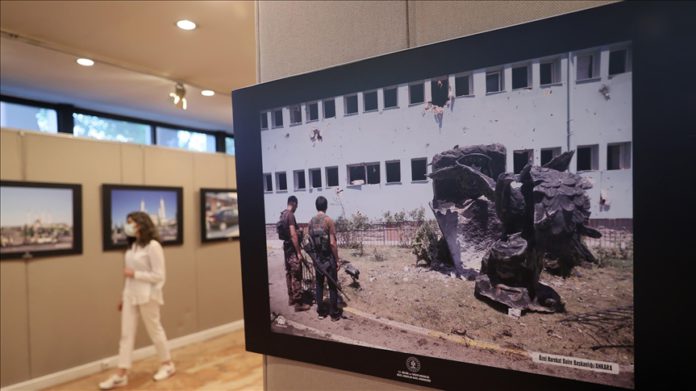 An photo exhibition by Anadolu Agency photojournalists, taken during a 2016 defeated coup in Turkey, was inaugurated Tuesday at the National Library in the capital of Ankara.

“Every day for the past five years, we see again and again what kind of danger we had faced and how this treacherous attempt has caused social and economic damage to our country,” Deputy Culture and Tourism Minister Ozgul Ozkan Yavuz said at the opening ceremony.

“What we have to do is to tell the new generation, without hiding anything, all its [details, just as we convey our cultural and historical values through culture and art activities in the best way possible,” she said.

The National Library does not only operate as such, but it also hosts important exhibitions and the exhibition is one of the most meaningful that has been displayed, she said.

Yavuz told Anadolu Agency that the government previously realized joint projects with the Turkish news agency and now has opened the exhibition because July 15 cannot be forgotten.

Noting that even after five years, the younger generation should learn about that night via photos on exhibit, said Yavuz.

“That’s why we chose this place for the exhibition because 80% of our readers and visitors to the National Library are young people,” she said. “We want young people to see this exhibition and remember the photos. There are 63 photos here. Every year, on July 15, we organize various activities to remember that night, to realize the damage it has done to our country, and to keep this in mind.”