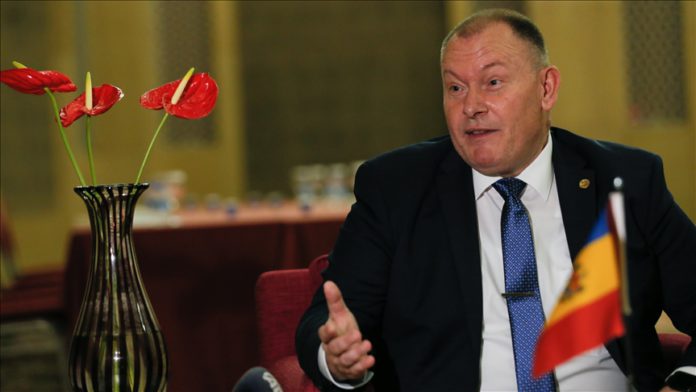 Turkey is a reliable partner for Moldova and will remain so after the upcoming parliamentary elections in the country, Moldova’s acting premier and foreign minister has said.

The foreign minister said any political party in the country would work towards further improving ties with Ankara, both political and trade.

On trade relations, he said the opening of a Turkish bank’s branch in his country would boost trade activities, considering the rise in the number of Turkish enterprises in Moldova.

A political declaration establishing a mechanism of high-level strategic cooperation between the two nations was signed in 2018 during Turkish President Recep Tayyip Erdogan’s visit to Moldova, he added.

“Definitely for the Republic of Moldova, Turkey is a reliable partner, which has been proven over the whole period of Moldovan independency since 1991,” Ciocoi stressed, adding that his country was celebrating its 30th year of independence this year.

He said the first meeting of the strategic cooperation mechanism in 2019 gave “huge impetus” to bilateral relations.

Moldova is looking forward to make its strategic partnership with Turkey “more consolidated, pragmatic, and developed” to the benefit of both sides following the country’s snap parliamentary elections slated for July 11.

Touching upon the issue of the breakaway region of Transnistria, located between Moldova and Ukraine during the dissolution of the Soviet Union, Ciocoi said Chisinau still seeks a political resolution to this “frozen conflict.”

He underlined that all political parties in the country were in favor of dialogue with all parties and mediators on the issue.

“In this respect, I’ll recall the five-plus-two format, which was designed to ensure political dialogue in order to find a long-lasting political solution for this conflict,” he said on the initiative that includes Moldova, Transnistria, the OSCE, Russia and Ukraine, as well as the US and EU as observers.

With the format, Moldova hopes to convince its partners of the need to start dialogue and “put a final point to the long lasting conflict.”

The minister also underlined the need to ensure that the entire country is at the same level of development.

The Transnistria conflict started in March 1992 and was concluded by a cease-fire in July of the same year with an agreement that suggested the establishment of the Joint Control Commission, which includes Russian, Moldovan, Transnistrian, and Ukrainian peacekeepers.

The truce has been held since then, though the territory’s political status remains unresolved and the relations between the sides of the conflict remain tense.

Trump grants clemency to 20, including ex-congressmen