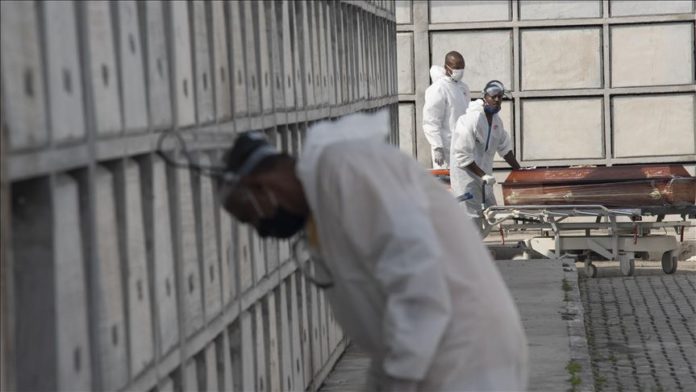 The number of people in Latin America who have died from the coronavirus surpassed 100,000 Tuesday.

Brazil recorded the second-highest number of daily cases since the beginning of the pandemic with 39,436 infections, bringing the country’s total to 1,145,906, the Health Ministry reported. Latin America’s largest country has typically recorded more than 1,000 deaths per day.

A judge in Brazil ordered President Jair Bolsonaro to wear a protective mask when he is in public spaces. The judge said the president would face a daily fine of 2,000 reais (US$388) if he continued wearing a mask incorrectly or not at all.

In recent weekends, Bolsonaro joined demonstrations against Brazil’s Congress and Supreme Court and he has visited bakeries and restaurants without complying with the law, which forces people to wear masks outside. The use of masks has been made compulsory by Brazil’s Federal District since late April to help control the spread of the coronavirus.

The South American country, which has the second-highest number of coronavirus cases in the world after the US, has begun tests with a COVID-19 vaccine developed by Oxford University. The first human clinical trials took place last Friday in the state of Sao Paulo, the most populated state in the country, and where the highest number of people have been infected and died from the coronavirus in the entire territory.

The project has a group of 2,000 volunteer health workers in Sao Paulo and another 1,000 people in Rio de Janeiro who will attempt to test immunization against the virus.

In the midst of Chile’s coronavirus crisis with 4,505 COVID-19 related deaths, the funeral of President Sebastian Piñera’s 104-year-old uncle, who died of COVID-19, triggered a debate on the rules of burials in times of a pandemic in the country.

A video was made public showing the opening of the coffin and the presence of more than 30 attendees, which violated prevention measures adopted by the government.

In the video, a woman says, “Sebastian [Piñera] wants to see it.” Meanwhile, some of the people there tell him that “the coffin cannot be opened,” among them the president’s cousin and former Interior Minister, Andrés Chadwick. Finally, in spite of the warnings, the assistant opens the coffin and says: “See, see.” The Chilean head of state, wearing a mask, approaches to observe.

This has generated much criticism from people who say the president of the country should comply with the measures imposed by the authorities.

“It’s not by chance that he died on Father’s Day, the victim of an illness that has caused so much pain and suffering to so many Chilean families,” said Piñera in his eulogy to his uncle on Sunday.