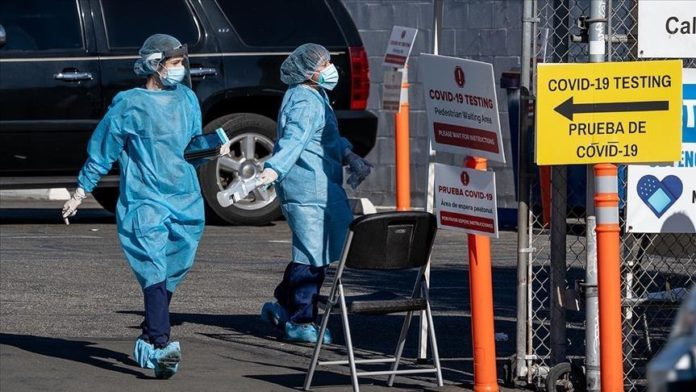 An attack on a nurse on Jan. 5 by a family who wanted the body of a loved one who died from the coronavirus is an example of aggression faced by health workers in Santiago.

“Between 12 and 18 people entered and we began to receive verbal attacks. They threw water, broke furniture, a computer, serums, and this situation generated a big overflow because there were patients and relatives in the room,” Carlos Caballero told Anadolu Agency. “They wanted to make a funeral for their father but by protocol, they couldn’t, and they didn’t understand that the result of the PCR was positive.”

The young nurse has worked for one year at El Pino Hospital, located in the San Bernardo commune, south of the Chilean capital. He said it is a situation staff must deal with daily to apply regulations by the Ministry of Health, regardless of how hard it may be for family members.

“We let the family say goodbye. This was outside of hospital protocol. They were given the possibility because the children commented that they were very attached to the father. They never had direct contact with the patient, it was completely closed and there was no physical contact. But when the positive result of the PCR came out, they did not receive the news well because they did not believe in COVID. They yelled at us to stop telling that ‘lie,’” he said.

For relatives of infected patients, it is difficult to believe the news but for doctors who fight the pandemic, it is a harsh reality that in recent weeks the virus has put the Chilean health system on alert with more than 4,000 daily cases, the highest figures high since June.

“What we are experiencing is not easy. Positivity is increasing, patients are getting more and more complex, we have new virus variants. I imagine the complexity that a human being can feel with the loss of a loved one, and not being able to be in those last moments. That is why I do not want to criticize the family,” said Dr. Mauricio Muñoz, deputy director of the hospital.

After violent recent incidents, health workers decided to demonstrate and ask for more security to continue to perform their work at a time when the number of coronavirus hospitalizations is close to 35,000.

Director of Hospital El Pino Patricio Vera said the medical center collapsed because of the high admittance of the population, which suffers from chronic diseases, although he acknowledged police have provided security after the latest acts of violence.

“There is a civilian police officer in the emergency service at the hospital after this incident, in addition to a permanent round of a radio patrol from the same institution. We are proposing a corresponding physical space to receive a permanent staff of carabinieri [gendarmerie],” said Vera.

The government has denounced violence against health workers and said there is no justification for doctors and nurses to be attacked while performing their duties, less during a pandemic that has already killed more than 17,000 and infected 642,000 in Chile.

“No desperation can carry out an act with violence against health personnel. They must not only protect themselves from contagion but also contain many of the families who are desperate as a result of the drama that they are experiencing. This is why the call to citizens is to empathize with these families, but not to react with violence in the face of these events,” said Undersecretary of the Interior Juan Francisco Galli.

In addition to confrontations with families of patients, health workers face a common crime and emotional exhaustion from being on the line against the virus and are under the permanent risk of becoming infected and infecting their families.

“I have colleagues on stress leave, on mood-stabilizing drugs, antidepressants, some with panic attacks. All because of the pandemic and the aggressions that are experienced daily. We have even received death threats and vehicle thefts have been recorded, in addition to being concerned about the population’s access to weapons,” according to nurse Casar Caballero.

In popular areas like San Bernardo, which is currently among the top 10 districts in Santiago with the highest COVID-10 infection rates, problems such as armed violence, crime, and drug use are added to the mix, which puts at risk medical personnel who are treating the current health emergency.

“We are afraid when entering and leaving the hospital,” said Caballero.