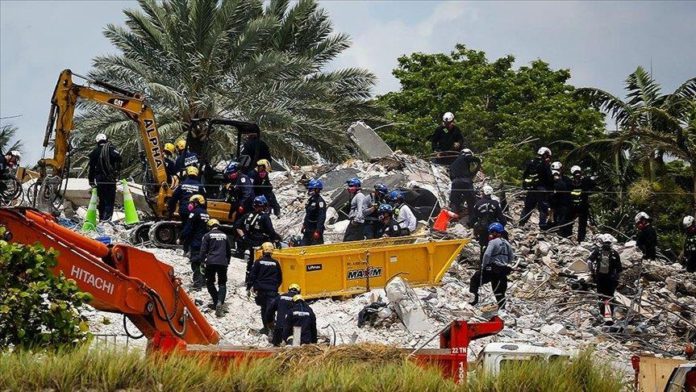 The death toll rose by four to 32 on Tuesday in the collapse of a Miami-area condominium building in the state of Florida, while the number missing stands at 118, according to authorities.

The updated numbers were announced along with a bleak assessment from the head of search efforts.

Cominsky was vague on when work on a massive pile would shift from a search to a recovery effort.

“We’re actively looking into and having different dialogues in regards to our strategies moving forward,” he said.

The scene on Monday was dramatic — with Tropical Storm Elsa’s high winds and rain lashing palm trees in the distance and dust and debris flying, workers continued to dig into the rubble.

The Mayor of Miami-Dade County, Daniella Levine Cava, said the pile of debris was estimated at nearly 5 million tons.

But searchers at least have a safer path in which to dig. The partial collapse of the Champlain Towers South building on June 24 left an unstable half still standing, which preventing searchers from reaching part of the rubble.

With the other half torn down in a controlled demolition late Sunday, searchers can now get to more parts of the rubble.

Levine Cava confirmed that at least three bodies retrieved from the rubble on Monday came from the area that was previously inaccessible.

But the look of things remained grim. A nearby makeshift memorial with countless flowers, cards and teddy bears, was drenched by rain.

As searchers filed into the scene, one told reporters: “It’s more of the same. There’s just less of a building.”