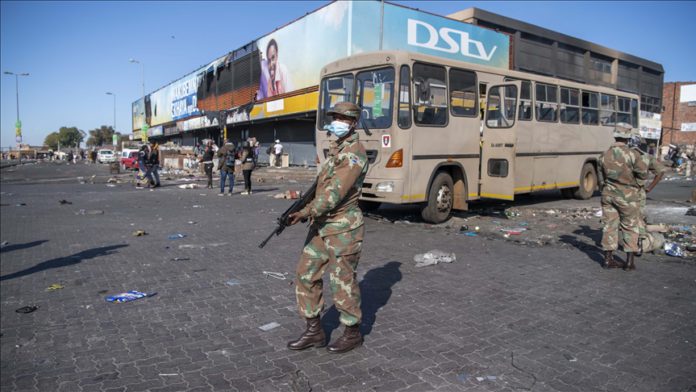 The death toll in South Africa’s violent protests against the imprisonment of former President Jacob Zuma has now risen to 72, according to authorities.

Police said late Tuesday that 1,234 people had been arrested for their role in rampant looting of businesses and destruction of property in both KwaZulu-Natal and Gauteng provinces.

Forty-five deaths were reported in Gauteng which includes Johannesburg and Pretoria, while 27 in KwaZulu-Natal.

Ten people were killed in a stampede in Soweto township near Johannesburg on Monday as they looted a mall.

According to authorities, other deaths and injuries were related to explosions of ATM machines that rioters attempted to break or died after shootings.

Violent riots and looting first broke out in the country last Thursday over the jailing of Zuma.

The protests that began in the eastern province of KwaZulu-Natal later spread to Johannesburg and have been ongoing for days.

Zuma, 79, started serving a prison term for contempt of court in KwaZulu-Natal on Wednesday night.

Minister of State Security Ayanda Dlodlo refuted claims that plans for violence had not been detected earlier due to neglect by her agency. She said her department played its part by sharing information with other security bodies.

“Intelligence has done the best it could do,” she emphasized.

Dlodlo said she had received reports of possible attacks against foreign nationals in the country.

President Cyril Ramaphosa on Monday authorized the deployment of Defense Force personnel to support the police in restoring order.

He said the violence and looting were unprecedented in post-apartheid South Africa.

On Monday morning, police were seen in running battles with looters in the towns of Soweto and Eldorado, south of Johannesburg.

Protesters were seen fleeing with stolen goods, including electronics, food items, and even mattresses. Some were seen hurling stones at police, who responded with rubber bullets and stun grenades.