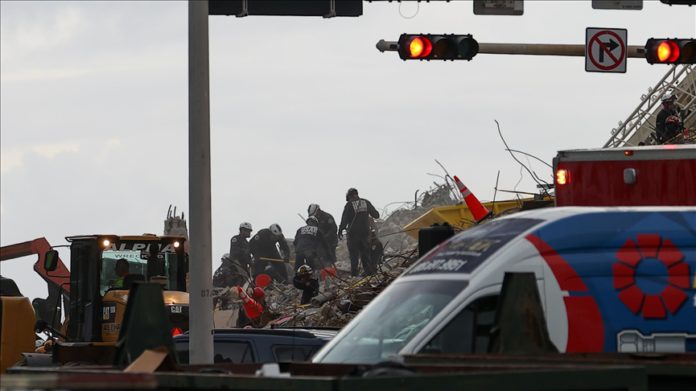 The death toll from last week’s partial collapse of a condominium in Surfside, Florida rose to 12 on Tuesday.

Miami-Dade County Mayor Daniella Levine Cara made the announcement that one more body had been pulled from the wreckage since Monday. She said there were still 149 people unaccounted for.

Cara said search and rescue operations continued throughout Tuesday despite “terrible” weather — showers — that continue to pelt the rubble and the searchers.

Some 125 people have been accounted for.

Cara said it has been challenging to get a grasp of those who are accounted and unaccounted for, since information is coming in from loved ones and friends around the country, or abroad, and also from those who have shown up on site.

“We’re getting this information from lots of different sources,” she said, “so our detectives are working around the clock to get in touch with all of those who’ve been identified to verify the results.”

Cara praised the “heroes” who are part of the search and rescue teams and also praised the donations that have been pouring in for victims and their families from around the world.

She also said she supports the opening of a grand jury investigation into the collapse. Investigators are zeroing in on a structural consultant’s report in 2018 that found “major structural damage” to an area of concrete beneath the building’s pool deck during an inspection.

President Joe Biden is scheduled to arrive at the scene Thursday, while loved ones gather nearby, clinging to hope. The leader of an Israeli rescue team told CNN on Tuesday that bedrooms of the condominium are buried under 13 to 16 feet of concrete.​​​​​​​

Cara said the search for survivors and efforts to identify victims remain “a slow and methodical process.”