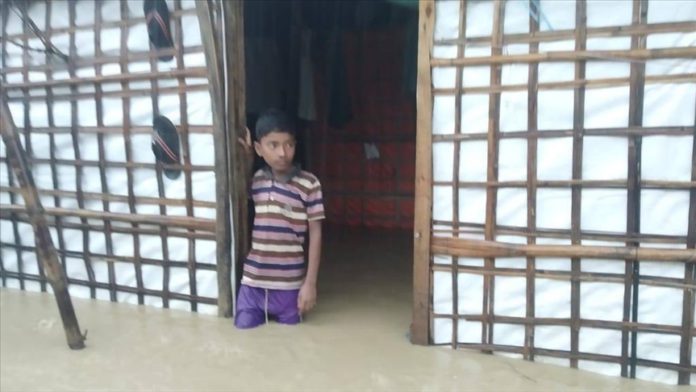 The death toll in Bangladesh’s Cox’s Bazar district from floods and landslides triggered by days of heavy monsoon rains has risen to at least 24, official and local sources said Thursday.

Six Rohingya at the Balukhali refugee camp are among the dead as well as 18 locals from various parts of the district.

More than half of the victims were killed due to landslides and the rest drowned in the floods.

“We have relocated many people to safe areas and are providing them with dry foods, water and other necessary items and we are also alert about [coronavirus] pandemic instructions while addressing the crisis,” Rashid said.

He added that under the supervision of executive magistrates, local authorities were working to relocate thousands of residents from risky hilly areas to safer locations.

Local residents also said that due to the heavy rains, many key roads and highways in the district have been inundated and communications disrupted.

“For an emergency need, I wanted to go to Ukhia subdistrict yesterday. But after traveling some ways, I had to return, as the main road was under deep water,” Mohammad Ahsan, a resident of Cox’s Bazar, told Anadolu Agency.

Meanwhile, thousands of stateless Rohingya have become homeless as their makeshift tents have been inundated by the onrush of flood waters triggered by the monsoon rains.

Many were seen moving towards safer locations carrying their children through hilly paths with a high risk of being washed away at any time.

“Plight is a part and parcel of our life,” said Rohingya refugee Mohammad Shamsuddoha, who has taken shelter at Camp 4 from Camp 3.

He said whenever the monsoon approaches, their stress levels rise.

“My request to the authorities is please do something effective for us to protect us from the horrific landslides during the monsoon.”

The Additional Commissioner of Bangladesh’s Refugee Relief and Repatriation Commission, Md. Shamsud Douza, told Anadolu Agency that they were trying their best to ensure the safe relocation of stranded Rohingya and those who are at high risk from landslides.

At least 10,000 Rohingya had been relocated to safe locations nearby as of late Wednesday, according to official records of the Bangladeshi refugee authority.

More than 1.2 million Rohingya, most of whom fled a brutal military crackdown in their home country of Myanmar in August 2017, have been living in Bangladeshi refugee camps located on a hilly region of Cox’s Bazar.

Hundreds of tents in the settlements in the world’s largest refugee camp have been built on the steep slopes of hills due to the congested environment with a high risk of being affected by landslides during the rainy season.

The UN Refugee Agency (UNHCR) in a statement issued late Wednesday expressed its condolences over the deaths of the six Rohingya from Tuesday’s natural calamity.

It said it was “deeply saddened by the tragic deaths of six Rohingya refugees as three days of heavy monsoon rains and strong winds pelted massive refugee sites in Bangladesh’s Cox’s Bazar on Tuesday, causing flash floods and landslides.”

Referring to the available initial reports, the statement added that “more than 12,000 refugees have been affected while an estimated 2,500 shelters have been damaged or destroyed.” ​​​​​​​

Citing weather reports, it said that over 300 millimeters (11.8 inches) of rain had fallen on the camps in the last 24 hours.