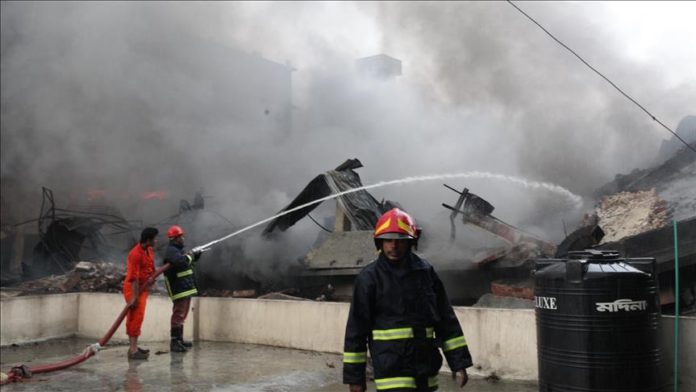 At least 52 people have been killed and 35 others injured in a massive fire that broke out at a food processing factory in Bangladesh’s industry-hub district of Narayanganj, the eastern closest city to the capital Dhaka, according to official sources.

Speaking to Anadolu Agency over the phone late Friday, Brig. Gen. Md Sazzad Hossain, the country’s central fire service head, confirmed that 52 dead bodies have been recovered and around 35 workers have been reportedly injured.

“Today (Friday) we have recovered 49 dead bodies from inside the gutted building while three died yesterday,” Hossain added.

He said they have completed the initial recovery operations and are hopeful that all dead bodies have been recovered.

Meanwhile, the exact reason behind the deadly fire is still unknown though primarily it is predicted that the fire may be caused due to a leak at any gas pipeline or electric short circuit.

Hossain, however, said that a five-member probe committee has been formed by the district administration to look into this incident while the fire service will assist the probe committee.

Md. Delwar Hossain, superintendent of Criminal Investigation Department Police of the district, told Anadolu Agency over the phone Friday evening that hundreds of workers were working at that time.

The deadly fire occurred at the factory Thursday night and 17 units of the fire service rushed to the spot to control the blaze.

A huge number of relatives of the victims on Friday demonstrated in front of the factory and adjacent streets in protest against the incident.

Referring to the rescued workers and relatives as claiming, local media also reported that the front gate that was the only exit of the factory had remained locked at the time of the fire.

“The building had no proper fire safety measures in place,” reported local daily Dhaka Tribune, quoting workers of the factory.

Many relatives of the victims burst out crying in the tragic environment after visiting the burnt dead bodies of their dear ones.

COVID-19: India on verge of shutdown