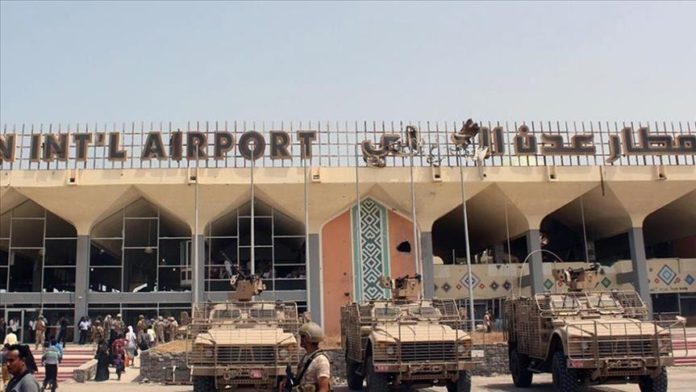 The death toll from three explosions that rocked the airport in Yemen’s southern port city of Aden on Wednesday rose to 25, the Health Ministry said on Thursday.

The number of wounded also rose to 110 in the explosions that took place shortly after the newly established government representatives arrived in the temporary capital.

“The number is increasing due to the critical conditions of some wounded at Aden hospitals,” Health Minister Qasem Buhaibeh said on Twitter.

For his part, Yemeni Information Minister Muammar al-Eryani said: “A journalist [TV reporter] was killed, while 10 [other journalists] were wounded in the explosions that targeted the Aden airport.”

He went on saying: “These are the ones who came to the airport to cover the arrival of the government.”

On Wednesday, the Yemeni Interior Ministry said that among the casualties were civilians, airport workers, and officials present in the area to greet Cabinet members.

Members of the Yemeni government survived the attack without injuries, it added.

A Yemeni security source, who preferred anonymity, told Anadolu Agency that the blasts targeted the VIP lounge at the airport, which is under the control of the Southern Transitional Council (STC) forces.

Yemen has fallen into a civil war in 2014 when Iran-backed Houthi rebels overran much of northern provinces, including the capital Sanaa.