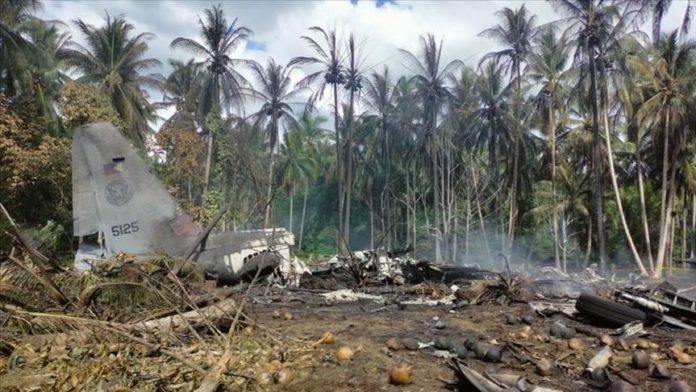 At least 50 people were killed when a Philippine Air Force plane carrying 96 people crashed in the country’s south on Sunday, said a military official.

In a statement, Philippine Armed Forces Spokesman Major General Edgard Arevalo said Monday that 47 of those killed were military personnel while the other three were civilians.

Meanwhile, the Department of National Defense said in a statement that 49 military personnel and four civilians were undergoing treatment for injuries.

The Philippine Air Force C-130 aircraft crashed in Patikul, Sulu province at 11.30 a.m. (0330GMT), according to the Philippine News Agency.

The military statement said the aircraft was carrying troops from Col. Jose Villamor Air Base in Pasay City en route to Lumbia Airfield in Cagayan de Oro, then missed the runway while trying to land at Jolo Airport.

The military presence in the southern Philippines is quite dominant to combat militant groups in the area, including the kidnap-for-ransom group Abu Sayyaf.​​​​​​​

Crash in international tourism may cut $4T in global GDP