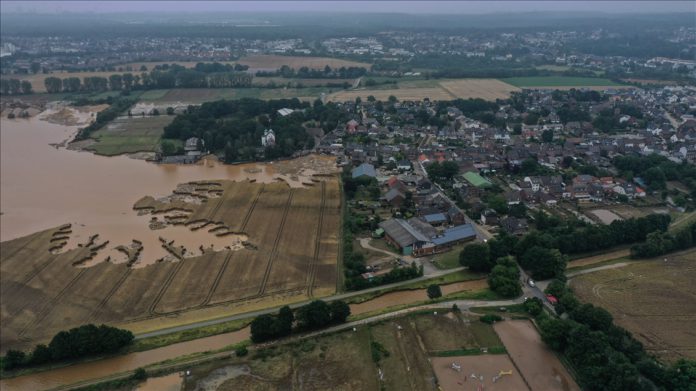 At least 135 people have died and dozens remain missing due to floods in western Germany, officials confirmed Saturday.

More than 90 people lost their lives in the hard-hit Ahrweiler district of the Rhineland-Palatinate state, the Koblenz Police Department said in a statement. It also reported 618 injuries due to floods.

ERFTSTADT LIBLAR, GERMANY – JULY 17: A drone photo shows an aerial view of a devastated area after a severe rainstorm and flash floods hit western states of Rhineland-Palatinate and North Rhine-Westphalia, on July 17, 2021, in Erftstadt-Liblar, Germany. The death toll from Germany’s worst floods in more than 200 years rose to 133. Search and rescue works continue in the area. ( Kadir Ilboga – Anadolu Agency )

The death toll was expected to rise as several villages in the western regions remained flooded after the historic deluge.

Rescue teams continued to search for and evacuate people to safer locations in the worst-hit areas.

With more bodies recovered from the debris in remote areas, the death toll has climbed to 135, public broadcaster ARD reported.

Chancellor Angela Merkel is expected to visit the flood-hit region of Rhineland-Palatinate on Sunday, according to local media reports.

There was still no power in many places in the region, and telephone lines were not working while streets remained closed.

Several Turkish NGOs in Germany, including the Turkish-Islamic Union of Religious Affairs (DITIB), appealed for donations to help those hit by the disaster.

The flooding has also killed at least 27 people in Belgium so far, according to local media.

Prime Minister Alexander De Croo on Friday put the official death toll at 20 and said 19 people were missing, calling the situation “the biggest disaster our country has ever seen.”

The country will observe a “day of national mourning” on Tuesday.

The heavy rains stopped on Friday in most of the eastern parts of the country affected by the flooding.

While flooding and overflow risk still prevails for some rivers, municipalities started to inspect areas where the water has receded.

Around 120 municipalities affected by the floods still have difficulty reaching many people stranded in their homes.