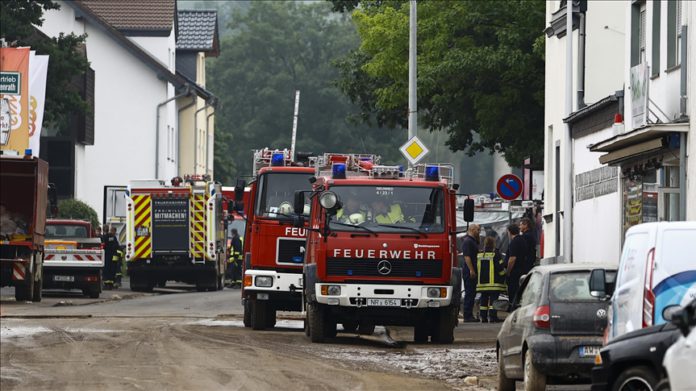 At least 133 people have so far been killed in floods in western Germany, officials confirmed Saturday.

More than 90 people lost their lives in the hard-hit Ahrweiler district of the Rhineland-Palatinate state, the Koblenz Police Department said in a statement. The death toll is feared to rise.

It also reported 618 injuries due to floods.

In the neighboring North Rhine-Westphalia state, officials have confirmed 43 deaths.

Germany’s worst floods in more than 200 years have swept away homes, caused widespread devastation in various towns and villages in the western regions.

The police statement also added that there was still no electricity in many places in the region and telephone lines were not working while streets remain closed.

The Turkish-Islamic Union of Religious Affairs (DITIB) launched a donation campaign for those affected by the flood disaster.

Meanwhile, the flooding has killed at least 27 people in Belgium thus far, according to local media.

Belgian Prime Minister Alexander De Croo, however, put the official death toll at 20 on Friday and said 19 individuals were missing, describing the situation as “the biggest disaster our country has ever seen.”

The country will observe a “day of national mourning” on Tuesday.

The heavy rains stopped as of Friday in most of the eastern part of the country affected by the flooding.

While flooding and overflow risk still prevails for some rivers, municipalities started to examine the areas where water has receded.

Around 120 municipalities affected by the floods still have difficulty in reaching many people who are stranded in their homes.