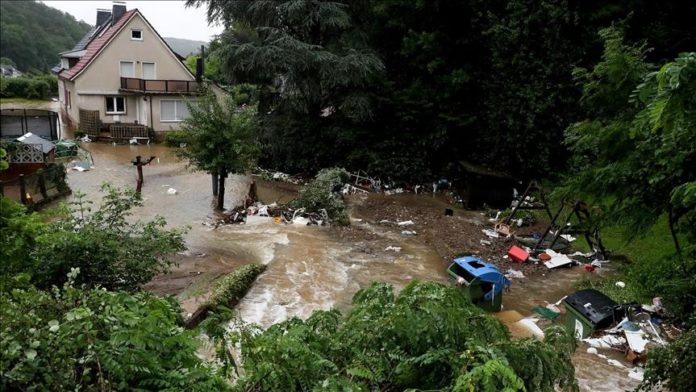 The death toll from Germany’s worst floods in more than 200 years rose to 103 , local news agency on Friday.

At least 31 people have died in the country’s North Rhine-Westphalia region.

The army has deployed around 850 soldiers to the hard-hit areas to assist in rescue efforts.

Many homes in the two states have collapsed and others face the risk of collapsing due to the floods, while streets are submerged.

The extent of the damage and overall situation in flood-stricken areas remains unclear as rescue workers had to cope with torrential rains that dumped 148 liters (39 gallons) per square meter in 48 hours.

Helicopters were used to rescue residents stranded on streets, in trees and on rooftops.

Villages and small towns in the western and southwestern areas of the country were cut off by floodwater and landslides that made roads impassable.

There have also been reports of widespread looting as residents were being evacuated from the flood zones.

Authorities in Rhineland-Palatinate warned that they expected waters in the Rhine and Moselle rivers to swell with additional rainfall.

There have also been massive power outages as more than 200,000 households are without electricity.

Meanwhile, public transportation has been severely affected by the catastrophic situation as train and bus services have been canceled or disrupted.